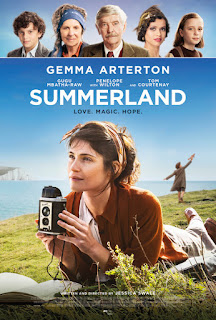 Posted by donnarcopeland at 11:29 AM No comments:

THE SECRET: DARE TO DREAM 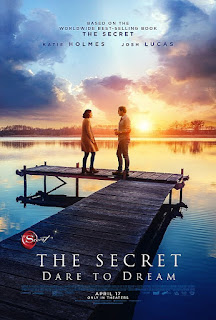 Sweet, syrupy, pure fantasy—I loved this movie!  The joke’s on me, because it’s not the kind of film that I usually take to at all—in fact, I’m often averse to this kind of thing.  Yet, there was something about it that moved me and sustained my interest the whole time.  It’s basically a tension between ultra-realism and pragmatics vs. determinism—everything happens for a reason and beyond one’s control. (So just relax, and everything will work out.)  I think it is the subtlety with which these ideas are presented that makes this film “excusable” to me.
The story is set up right away showing a life that seems hopeless.  Miranda (Holmes) is a struggling widow with three kids.  Her house is falling apart, she is forgetful, and her kids are so keenly aware that they can’t afford the kinds of things kids want, it continually reminds her of the loss of their dad.  On the positive side, she has a secure job where the owner of the restaurant, Tucker (O’Connell), is attracted to her and a mother-in-law who—though bossy—is someone she can depend upon and truly cares about her and her children.
One day, when Miranda is arguing with her daughter in the car coming home from school, crash! she rear-ends someone in a pick-up truck.  But the driver is one of those individuals who is intuitively sympathetic and empathic—so much so, he offers to repair her bumper, the only thing damaged.  (Note:  This is a continuation of the tension between optimism and pessimism.)  Brad (Lucas) stays on the scene, helping her and her kids both emotionally and in practical things, like repairing the roof after a storm…all set up to continue the parable of self-determinism and fate.
The film is very well directed by Andy Tennant from a finely written script, and the actors led by Katie Holmes and Josh Lucas make the story zing.  Yes, you’ll have little surprises along the way, although some of you will chafe at the predictability.  But there are little tweaks that take it beyond the ordinary.  For example, the mother-in-law (expertly executed by Celia Weston) is shown in stereotypical ways (i.e., obnoxious), but also with genuine caring and concern for her daughter-in-law.  She represents the “good sense”, “practical” side of the story’s argument, along with her favorite, Tucker, who faithfully pursues someone he cherishes.
But Brad represents the figure who, after a traumatic event, alters his life toward one of acceptance and hope, taking in stride whatever happens and making the best of it for others as well as for oneself.  This attitude is shown to be inspiring to kids as well as adults, and is the central message of the film.

The Secret turns out to be a nice surprise, and one that could stimulate more serious discussion later.

Posted by donnarcopeland at 6:24 AM No comments: 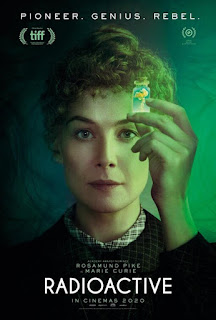 In an extraordinary production directed by Marjane Satrapi and starring Rosamund Pike as Madame Curie, we hear the story of an eccentric scientist who won two Nobel prizes through much conflict and a certain amount of public hatred. She was the first woman to win a Nobel, notably being relatively unimpressed with it, but at the same time fighting for her role in it.
Madame Curie (nee, Marie Slodowska) was having a difficult time holding onto a lab to do her work—both because of her being a woman trying to do science and because of a rather cantankerous personality.  It was most fortunate that her path crossed that of Pierre Curie who recognized immediately that they could achieve much more working together. It was likewise fortunate that he knew how to “handle” her, which included being conscientiously careful in seeing that she received every credit she was due in their partnership. For instance, initially, the Nobel committee was intending to give the prize to him alone, but he would only accept it if they gave it to both of them.
The story is fascinating in a number of ways; first of all in seeing the hurdles she had to jump over in even being able to be a scientist, but secondly because of a quirky, prickly personality.  She was highly complex in her make-up, having a phobia about hospitals, being ambivalent about recognition yet ferociously insisting on getting credit for her achievements, and giving in completely to the love she had toward her husband.  She and her husband were also unusual in their communication with one another and in the family. Sensitive topics were never out of bounds for discussion, and they could have heated arguments, then easily switch back to a loving relationship.
Pike is well known for her talent and skill in acting, and here once again she captures what I presume is the essence of who Marie Curie really was.  It should be a career high for her.  (I have not read Lauren Redniss book on which Jack Thorne based the script, but would guess that the film is a fine representation of Redniss’ work, which was a finalist for the National Book Award in 2011.)  Sam Riley as Marie’s husband makes a good match with Pike, and the scenes they’re in together are electric.
Another aspect to marvel at in this production is Anthony Dod Martle’s artistic cinematography, which he uses to further the story and accentuate the dramatics. I think it’s a case where one could look at and revel in the pictures alone without the sound.  Transitions, close-ups, and the blending of visuals are striking in their own right.
Personally, I was very moved by Radioactive in that when I was a psychologist at M. D. Anderson Cancer Center, much of my research was about identifying the effects of central nervous system radiation on children’s ability to learn years after they received it.  Kudos also to the film for showing the positive and possible negative effects of scientific knowledge—about which Madame Curie eventually became all too aware.  Her redemption came partly from the effectiveness of radiation that was helpful even at that time, and in her daughter’s continuing discoveries of its use in medicine and on the battlefield.
Radioactive is a film I wish all young people could see for its modeling of simple passion for science, the challenges that arise in the tension between family life and career, and the prejudices that can appear from a general public that is not educated or well informed enough to override petty concerns.  The film is most timely in all these aspects.

Now appearing on Amazon Prime, this is a story that will entertain, inspire, and inform anyone who sees it.

Posted by donnarcopeland at 1:33 PM No comments: