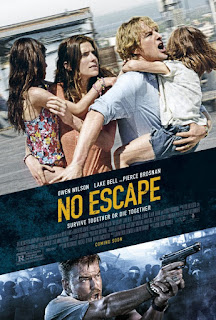 There is no escaping the relentless strain of one close call after another in No Escape.  It starts out with gunfire and a slit throat, which should tell you something about what is to come.  The premise of the film is a good one; after his business fails, Jack Dwyer (Wilson) takes his family to his new job in an unspecified Asian country completely unaware of the political unrest brewing.  The natives are wising up to big companies coming into their country and exploiting them (e.g., privatizing their water supply on the stated intention of water purification), the business of Jack’s new company.  As soon as the Dwyers (Bell as Annie) arrive in the country and register in a hotel, the gunfire starts, phones don’t work, and snow comes on the TV.  A coup is suddenly taking place.
But throughout the rest of the film the Dwyers with their two young girls in tow, are running, running, running, jumping from one building to another, hiding underneath something to avoid the mobs and gunshots, fighting (literally) for their lives, and trying to strategize plans and make their way to safety in a city completely new to them.  Not much happens beyond the close calls.  Hammond (Brosnan), whom the Dwyers meet on the plane when one daughter asks about his scars, is a mysterious fellow who magnanimously offers them a ride to their hotel, and suddenly reappears just the nick of time on several occasions.
Owen Wilson is much better known for lighter roles (except for Behind Enemy Lines), but steps up to a more complicated role here of being a nice guy, good husband and father, and then compelled to protect his family at all costs.  He and Bell have good chemistry as a husband and wife, and both actors are exemplary in their performances.  Brosnan is perfect for his (by now expected) role of someone who is ambiguous initially, but ends up being a hero.
My problem with this film is the script.  I cannot see the purpose of a movie that has one close call after another for the entire film.  There is little comic relief or even dialog that reflects the humanity of anyone, except perhaps for a conversation between Jack and Annie toward the end.  The Dwyers are constantly quarreling with one another about strategy, and the kids’ roles seem like they’re written by someone who doesn’t know kids at all.  The girls—especially the older one—end up being rather annoying—which shouldn’t happen in this kind of film!
How much better it would have been if the writer/director John Erick Dowdle (written with his brother and producer Drew) had offered more background on Jack’s new company, on the brewing unrest within the foreign country, of Jack’s failed business, and the relationship between Jack and Annie before the action, all of which could have eliminated some of the too numerous close calls and senseless violence.  As it is, the film goes far beyond plausibility.  And as an aside, who would go to live in a foreign country without making any attempt to learn a few basics about the language?

Moviegoer beware unrelenting violence of almost every kind.  This is an action film with little else.

Posted by donnarcopeland at 12:08 PM