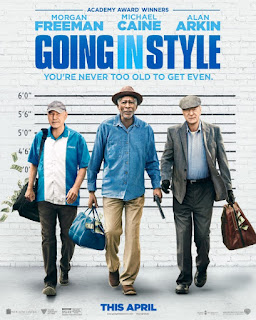 Going in Style is primarily a comedy, highlighting its three main stars (Freeman, Caine, Arkin), their struggles with aging, and the mixture of easy camaraderie and insults going on between them.  It’s a remake of the 1979 Going in Style with George Burns, Art Carney, and Lee Strassberg. As in the previous version, to spice it up, a bit of “justifiable” crime antics loosely akin to that in the recent Hell or High Water (at least in its rationale) make it much more interesting.  It plays on the immediate fears of older people today about their pensions and Social Security and the anger toward contemporary banks for their misbehavior.
Joe (Caine) is in a bad place because he is financing his granddaughter’s education; Willie has major kidney problems that need attention, and Albert (Arkin) is simply trying to survive.  When the company they worked for, for years, pulls the rug out from under them, they have to figure out a plan.  About the same time that Joe is having discussions with his obtuse, unsympathetic banker who sold him a policy that eventually tripled his mortgage payment (reminiscent of hundreds of such scams in our recent past), thieves hold up the bank.  When they get away with a million plus dollars, Joe says, “Hmmm…”
The film proceeds formulaically like a comedy show with precise timing of jokes, human interest segments, and clever twists of plot.  A romantic connection is clearly inserted to appease those who need that element.  But the major twist toward the end involves an astute child wise beyond her years.  I guess it was the only way the filmmakers could get out of a bit of a mess, and it will surely please most of the audience.
Directed by Zach Braff (Garden State, Wish I was Here), a man much younger than the character and actors, it helps us empathize with so many older Americans who have lost their pensions to corporate thoughtlessness, greed, and bank scams.  Leads Michael Caine, Morgan Freeman, and Alan Arkin are all pros who have worked together previously in various combinations, and they give gravitas to the production.  Strong supporting roles are played by Dillon, Margret, Thompson, and King.  The soundtrack and original music of Rob Simonsen provide entertaining, lyrical tunes as an accompaniment.

Posted by donnarcopeland at 8:35 AM