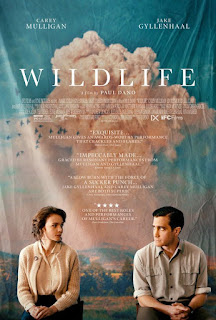 After demonstrating his acting abilities in acclaimed movies (e.g., There will be Blood, Little Miss Sunshine, Love & Mercy), Paul Dano decided to try his hand at directing a movie based on a book written by Richard Ford, which brings us to Wildlife.  The book spoke to Dano, reminding him of his own experience of his parents’ separation, in which, as an only child, he was inclined less to rebel and act out, and more to try to hold everything together.  He was the responsible one, the “parent child” in psychological parlance.
In the film, we see the family first as having just moved from Lewiston, Idaho, to Great Falls, Montana.  Joe (Oxenbould), a teenager who has felt uprooted with the move, is trying to satisfy his father’s wish for him to become a football star.  His father Jerry (Gyllenhaal) has aspirations to become a force in golf at the local club where he works.  However, he gets fired—in his own words—because he is so good with the customers.  When the club has second thoughts and wants to re-hire him, the narcissistic wound of rejection prevents him from accepting.  Instead, for some reason (visions of greatness?), he decides instead to fight forest fires raging in the nearby forests, which will take him away from the family for several months.
Incensed, Jerry’s wife Jeanette (Mulligan), rails at him for the stupidity of his plan.  In the meantime, she has decided to ignore Jerry’s wish that she remain a housewife and has taken a job as a swimming coach.  This will introduce her to a different world from that she has been trained for and is used to, and brings her in contact with people in the town; one of her students is a wealthy widower, played by Bill Camp.
The story is about what happens in this interim when the parents are separated, and Joe, feeling the tension between them, tries his best not to take sides and accommodate to an altered world.  But in fact, in Dano’s description, he is a “kid being kicked out into the wild [and told], “This is the real world.”  In other words, get used to it.
The rest of the story is about Joe’s experience of being with his mother, completely cut off from his father, and having to somehow make sense of it all.  In the role of this character, Oxenbould, a young Australian actor, perfectly captures the basic dilemma and the multiple awkward positions his mother places him in during the course of the movie.
Problems with the film could be with the way the parents communicate with Joe. It seems to me they relate to him in ways that are unrealistic, asking his advice at strange moments (“Joe, what do you think I should do?”; “Joe, how do I look?” [for an interview or for a date], and always turning to him in moments of crisis.  I haven’t observed any parents being this blatant, but given that Dano is basing this partly on his own experience, maybe it happens.
This is probably the “meatiest” role in Carey Mulligan’s career, and she takes to it with all she has.  She is brilliant.  Her character’s common sense arguments/putdowns of her husband’s decisions are careful not to attack him directly and personally, but clearly she conveys she is her own person and not willing to subject herself to anyone for any reason.
I never have enough words of praise for Jake Gyllenhaal; he inhabits all different kinds of characters in ways that are always believable.  I had a hard time at first seeing him as a passive/aggressive figure who is fiercely independent, assuming his family would be waiting for him with open arms when he returns, but of course he does just that with all the authenticity the role requires.
Paul Dano should be very proud of his new direction (and a script in collaboration with Zoe Kazan); he has all the makings of a good director who has an eye for the overall picture and knows characterization well enough to cast fine actors for the roles.  I congratulate him and his collaborators for a film in which a kid succeeds despite his parents’ utter disregard for him.  Let’s all hail the promise of the human spirit over adversity.

An example of how a teenager can master the challenges his family—and life—can throw at him.

Posted by donnarcopeland at 11:16 AM