MIDNIGHT IN THE SWITCHGRASS 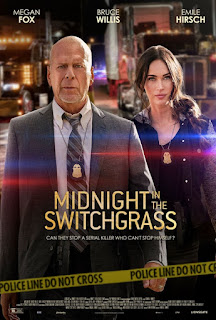 This is a thriller to be sure.  It starts out showing us the derring-do of female FBI agent Rebecca (Fox) whose risk-taking freaks out her partner Karl (Willis).  She is bound and determined to ensnare a serial killer of young women, doing it by making dates with suspects.  After a few hunches that turn out to be wrong, Karl worries about his own safety as well as hers and quits the case.

Rebecca has her counterpart in young local detective Byron (Hirsch), whom she gets to partner with her after Karl has withdrawn.  She is still confident that she will be able to snare the killer.  Byron’s supervisors have asked him to drop his searches, but both he and Rebecca are aware that since many of the slain girls were prostitutes, law enforcement doesn’t show much interest in solving the crimes.  They both show empathy for the girls and feel impelled to save others, no matter the risk.

The filmmakers (director Randall Emmett and writer Alan Horsnail) keep the tale taut and suspenseful, even after the murderer is revealed to us.  In the process, the characters’ stories become ironic at times, telling at other times, and sometimes just plain eerie.  My only wish was that Karl’s backstory was revealed.  Willis is a powerful presence—and well-known, of course—so we’re given tidbits, but I think revealing more about his character would have contributed to a fuller enactment.

Even so, Fox, Hirsch, and Haas keep us engaged the whole time.  They are all talented in bringing their characters to life in roles that complement the main character.

While Midnight in the Switchgrass is thrilling and interesting to watch, I see little that is new and innovative in the genre.  For those who love this kind of movie, it is well worthwhile.