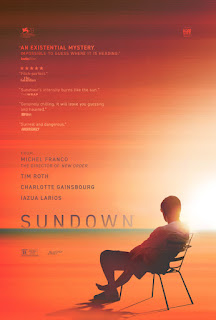 This intriguing narrative teases you along doling out bits of information in a slow stream (background, identities, and thought processes), prompting your hypotheses and predictions, but guiding you somewhere unexpected all the time until perhaps the very end.  It’s exquisitely written and directed by Michel Franco who must know something about detective novels—although here, he’s written it so that you are the detective.

We first meet Neil (Roth), Alice (Gainsbourg), and two teenagers at a swanky resort in Acapulco.  Alice lets Neil know how glad she is that he came on the trip (“Of course!” he replies) and a number of times they refer to “the children.”  Relationships are not spelled out at this point.  It’s apparent that Alice is the warmer of the two personalities and much more demanding of others, although she warmly tries to accommodate everyone.  We learn that she is a successful businesswoman, very committed to her work.

Gainsbourg is famous for her acting in over 75 films, particularly in Nymphomaniac, Melancholia, and Antichrist, award-winning films, and for her performance particularly.  She brings her art to bear in Sundown, where she is the main focus of the family group enjoying a relaxed vacation in which she is wheedled into playing dominoes and staying away from her phone.  Curiously (for the naïve viewer), Neil does not play a dominant role in a situation where the man often does.  He is agreeable, but noncommittal.

Tim Roth is perfectly cast as the character Neil—often in the background—who offers little information as to who he is or what he might be thinking.  Yet, he remains the star of this drama, someone who often just looks silently at the person asking him a question who must use his/her judgment as to how to respond.  We observe him making leading moves and doing surprising—even outrageous—things.  Who is he?

You will know very well by the end of the movie, one that is well crafted to make you think, observe your stereotypical thinking along the way, and leave you with questions to ponder as to the characters and the drama that you’ve just watched.

This is not an “enjoyable” film, but it held my interest throughout with its eloquence in depicting human beings and the endless ways in which they present themselves and find solutions to the situations they encounter.  A big omission in assessing the movie is in not letting us know just how much one character (Alice) knows about another’s (Neil’s) current status.

This is a mystery well worth your time in its depictions of real people facing daunting situations and in its revelations about us, the viewers, as we make our assumptions about what we see.