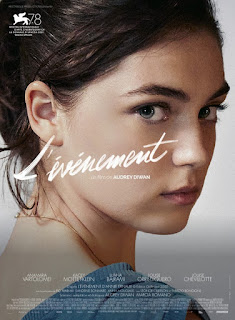 Was it serendipity or did the French filmmakers of Happening know to release their film at this precise time in the U.S.?  Happening is something that everyone should see, given our current state of affairs in which Roe vs. Wade is likely to be overturned in the U.S.  I have to think that director Audrey Diwan (and co-writer with others including the autobiographical novelist Annie Ernaux) must have had some inkling that the topic would be coming to the forefront in our country just when their film is opening.  (I read that it so happens that Audrey Diwan was aware of the recent Texas law against abortion, which reaffirmed how topical her film is.)  The production is so well done, the viewer is in lockstep with the protagonist every step of the way, admiring the fortitude and singularity of will that it took to achieve what she did.

The setting is France in the 1960’s when young Anne (Vartolemei), a promising student is looking toward exams that will determine whether she can go to university.  She’s such a good student, she has little of the anxiety her girlfriends show.  Her parents who own a bar/restaurant are always encouraging, and her classmates often look to her during study periods.  She is serious about school and clearly loves it, and is less interested in socializing, although she navigates in that realm very well.  Suddenly, she feels alarm when her period is late.

At that time, France had laws similar to those recently passed in Texas and other states prohibiting abortion and penalizing the woman and anyone who aids her in obtaining one.  We see Anne’s creativity in pursuing every avenue she can think of to assure that she will be able to continue on her path to university.  But another hallmark of the movie is to show how isolated she becomes when almost every person she turns to refuses to be involved—which is understandable because to help her would risk prosecution.

Actress Anamaria Vartolemei, who plays Anne, has already won a Cesar and other awards for her performance.  She is one of those actors to whom your eyes are always drawn when she is in a scene.  The close-ups of her face convey a wealth of information not only about what is going through her mind, but what is going on generally.  She can be just a regular—although very bright—student, with good friends and attractiveness that catches the eye of others, especially males, or alone in a major dilemma either about what to do next or figuring out how to escape a situation.

The beauty of the film is partly about the heroism of a woman/women in the face of threat and partly about the importance of education in an individual’s life.  When the professor confronts Anne about why her grades have fallen off and how she can justify asking for copies of the lectures she has missed—such as an illness—she replies forthrightly that it was “the illness that strikes only women and turns them into housewives.”

Although praising the film, a British reviewer whom I respect (Peter Bradshaw of the Guardian) wrote in April, 2022, that this film is “old-fashioned in its vehement emotional message.”  Most likely, he did not know how relevant it would be in the U.S. a month later.

Facing unforeseen challenges in one’s life may be the mark of true character…if one can overcome all the obstacles thrown in the path.

Posted by donnarcopeland at 1:52 PM