ALICE THROUGH THE LOOKING GLASS 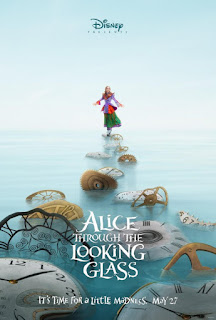 Constant artificiality in the emotional exchanges and CGI effects makes much of this film meaningless.  It’s like a stroll—or a run—through a garden of artificial flowers or being stuck inside a video game, as in the Russian film Hardcore; only this is for kids.  Case in point, Alice is congratulated profusely in the end, but it’s not very clear exactly what she did other than sail/burst around in a time machine that pops her out on the ground or the floor.  Traditionally, the hero(ine) is sent by fate through trials that establish her mettle, but we see none of that here.  The main point of the film—which is that you can’t change the past—is obscure, until Alice talks about learning her lesson at the end.  Otherwise, all the action of the film is trying to do just that, change the past.
The film opens with Alice the captain of a ship in dangerous waters where she is willing to take risks (she doesn’t believe in “impossible”), even against the advice of her crew.  Of course—this being Alice—she makes it safely to her homeport, pumped about the next adventure.  To her dismay, her benefactor has died, and his son Hamish (a rejected lover) wants to reclaim her boat, has made a spurious deal with her mother regarding her home, and now wants her to work as a clerk.  What to do?
As she is mulling this over, Alice gets a message from the Blue Caterpillar (Rickman) that she is needed back in Wonderland, so she goes through the glass portal to see what is wrong.  It’s the Mad Hatter (Depp), who has slipped into a dangerous depression following the disappearance of his family.  After discussing it with the White Queen (Hathaway), Alice pursues the possibility of going back in time to “get” his family and bring them up to the present.  The person in charge of the “Chronosphere” is Time (Cohen), and he warns against the plan.  Not to be deterred, Alice gets her hands on it anyway, and proceeds.  There follows lessons about the folly of trying to change the past, side issues of sibling rivalry, and the values of home and family.
With CGI overwhelming the story, it’s difficult to see how children would really come away with the messages—as mundane as they are.  They are likely to enjoy the production design (Dan Hanneh) and special effects in and of themselves and the costumes (Colleen Atwood), but as far as deriving any edification about sibling rivalry, undoing the past, or the rights of females, I doubt those things come through.

A CGI bloated production with a weak storyline. 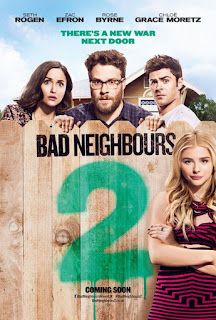 Neighbors 2 is essentially the same as Neighbors (2014), except that gender stereotypes are even more pronounced, although the filmmakers try to promote women and gays in a more positive light toward the end, as if to make up for earlier scenes.  In earlier scenes women are shown as giggly, squeaking, sobbing uncontrollably at a sad show on television, and on and on.  They’re depicted as dumb (e.g., not knowing what ‘escrow’ is, not recognizing the implication of water breaking in a pregnancy, and immediately accepting of a man who appears authoritative to them and promises rescue).  Note that all the writers are male, so expect this to be a male fantasy with a few curbs just to be politically correct.
Granted, men are portrayed as dumb and bumbling too (clueless about parenting, unable to pull off a heist) and prejudiced against gay men, but they’re also the ones with ideas and computational abilities.  Actually, the film for the most part is accepting of gays by portraying them more or less realistically.  I wish they had been as open-minded toward women.
The first Neighbors chronicled the trauma of a young couple with a baby who is unlucky enough to have a fraternity move in next door (loud partying, mainly).  Things got partially resolved, and now that the couple is expecting another child, they want to sell their house and move somewhere else.  The problem is that just when they are getting close to finalizing the sale, a sorority moves in next door, which makes matters worse (Dontcha know—women are always worse than men!).
What follows is the same kind of one-upmanship that we saw in the first Neighbors, with ridiculous ideas turning slapstick bad.  The only time I really laughed was when a young person not knowing about landlines pulled the “old people’s” phone off the wall, not realizing it was attached.
Neighbors 2 is an excellent example of a film not needing a sequel, but filmmakers see the $$$ and do it anyway.  They recycle the same plot and jokes trying to refit it to be more politically correct (although they still don’t seem to be aware that the word “frat” is not really accepted in Greek communities at universities).  I didn’t hear too many laughs in the screening I attended with around 200 people.  Maybe it’s not so funny after all?

The not-funny-again sequel to the 2014 Neighbors.

Posted by donnarcopeland at 8:57 AM No comments: 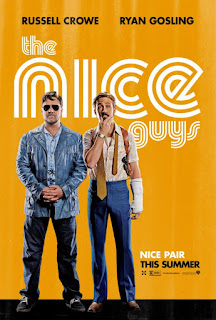 Holland March (Gosling) and Jackson Healy (Crowe) are like Abbott and Costello private detectives.  They argue, fight, and bumble their way through the plot of trying to locate a missing woman.  They’re often puzzled about what is transpiring, yet manage to get through all the scrapes.  Their characters are interesting, and Gosling shows more comedic chops and timing here than in his previous comedies.  March seems hopelessly incompetent and clumsy with a weakness for alcohol, yet has a brain and is well read enough that his vocabulary often stumps his competitor/fellow principal investigator Healy.  He also has a kind heart (placing a pillow under an unconscious foe), and is devoted to his daughter Holly (Rice) as best as he knows how.
Healy, on the other hand, is very serious, doesn’t drink (much) on the job, and serves as the brawn to March’s brain.  He has a conscience and a kind heart too—at least for children—and is not quite as ready to stiff his clients as March is.  Crowe is perfect in portraying a street-smart brute who can lure his prey by distraction then deliver crushing blows.
Neither March nor Healy is a very responsible adult for children, but quick-witted Holly inserts herself into their jobs and turns out to be a valuable, though unacknowledged, aide.  She lends her own wry, astute comedic observations of the adults and manages to be at the right place at the right time, uncovering important clues, and coming up with ploys or a gun that she knows how to use.  Although it is disconcerting to see, that along with the good values she has absorbed from her father, she has also learned techniques of sociopathic exploitation.
This is a mess of a movie in some ways, with tons of violence and over-the-top ridiculous plot twists.  My impression is that this could have been a sensationally funny, dramatic hit with a message if the writer/director Shane Black and his co-writer Anthony Bagarozzi had chosen subtlety over unrestrained stunts and violence simply for effect.  For instance, it’s hilarious when one flirtatious character swims after mermaids and does a back flip over a wall to impress a woman, but ends up tumbling down a hill.  But this is not Shakespeare’s Midsummer’s Night Dream, a farce with multiple plot lines ultimately making a statement about the mysteries of love.
If The Nice Guys has an underlying point, it may come at the end when the two protagonists are cynically reflecting on the corruption of justice and the manifold points of view that can come to bear on real situations.  It’s too bad the filmmakers did not elaborate more on this, Healy’s wrestling with his conscience (especially when it is pricked by Holly) and March’s coming to terms with his guilt about his wife’s death, which would have made the story more substantive and meaningful.

The Nice Guys is a farce with unrealized potential.

Posted by donnarcopeland at 1:19 PM No comments: 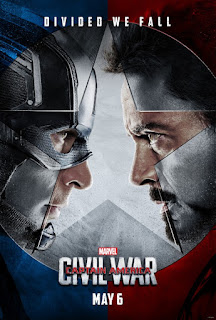 Keep your eye firmly on the screen because this Captain America travels at lightning speed across the continents, through the story line and the 90+ characters, over 20 of which are central to the action. Despite this complexity, more than in many action films, screenwriters Christopher Markus and Stephen McFeely present a coherent plot, fairly easy to follow for non-diehard Marvel Comics fans.  Industrial Light & Magic’s visual effects are stunning.
It seems that after numerous deadly encounters through the years between the superheroes and the bad guys, much collateral damage has been incurred, making citizens fearful and governments thinking the Avengers need to be reined in.  It’s proposed that a United Nations panel be appointed to supervise them and set limits on what they will be allowed to do.  Tony Stark, aka Ironman (Downey), specifically is confronted by the mother of a promising son who was involved in charity work when he was killed in Sokovia, incidental to the Avengers’ defeat of the super villain Ultron.  The nation of Sokovia was decimated in that battle.
Out of some guilt and reasoning, Stark is in favor of going along with the UN proposal called the “Sokovia Accords” when Secretary of State Ross (Hurt) presents it to him.  Tony brings it up to a few other super heroes for consideration, including Captain America (Evans), Black Widow (Johansson), the Falcon (Mackie), and Scarlet Witch (Olsen).  Vision (Bettany) and the War Machine (Cheadle) are already on board with the Secretary.  The film laudably presents logical arguments for and against the proposal, which have to do with individual freedom versus community interest and true heroism versus vigilantism.  Those on Tony’s side—Black Widow, War Machine, and Vision—regard community concerns as paramount; whereas those taking the other side—Captain America, Scarlet Witch, and Falcon—trust their own moral judgments over a committee’s and foresee that their individual assessments in emergency situations will be more effective than judgments by a committee.  This mistrust on the Cap’s part continues the theme from the 2014 Captain America film; namely his experience of being betrayed by authorities.
So the lines are drawn between Stark and Captain America representing both sides of the argument, both of whom bring in recruits:  Spiderman (Holland) by Stark and Hawkeye (Renner) and Ant-Man (Rudd) by Captain America.  Fierce battles will be waged until an evil plot of divide-and-conquer is uncovered.  The Winter Soldier (Stan), Black Panther (Boseman) and Zemo (Bruhl) will play pivotal roles.
Directors Anthony and Joe Russo (Captain America:  Winter Soldier) with their writers create an adventure-filled fantasy while clearly and intelligently addressing important moral issues related to security, privacy, individualism, and the role of governments in our world.  Grief over major losses and testing friendships add social/emotional components to make the action more meaningful.
The cast is phenomenal, with most of the experienced, well-known superheroes skillfully reprising their roles.  Tom Holland as Spiderman is a welcome newcomer, acing his role with competency and humor.  Chadwick Boseman as Black Panther with cat claws is likewise effective in his introductory appearance.

A visual effects extravaganza with exciting and still meaningful content.


Posted by donnarcopeland at 9:24 AM No comments: