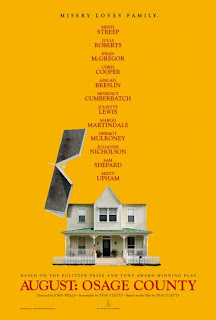 August:  Osage County is a rip roarin’ study of a family in Oklahoma that is perpetually on a tinderbox.  The slightest disagreement can erupt into a major battle, and the only way they see to keep the lid on is to hide all their secrets.  Of course, this is a strategy that always fails, but like the good neurotics they are, they keep using it, thinking it will work.  As the story proceeds, we learn that the cruel parenting we witness stems from troubled childhoods, and we see it spread like an infection from parent to child across generations.  As each secret is uncovered, it has an explosive effect on all involved.
On a more elegant note, the ensemble cast is a study in streamlined acting that continually hums along as if they had worked together for years and filled out every detail.  At the center of the story—and the cast—is the consummate award-winning actress Meryl Streep, who plays the damaged matriarch in a family with three grown daughters who have come home to “comfort” their mother after a crisis.  Her sister is present as well, with her husband and son in tow.  Present as well is the recently hired cook/housekeeper who is a beacon of sanity in the dysfunctional, turbulent group.
The screenwriter Tracy Letts (Killer Joe) has based the script on his play with the same title, which premiered on Broadway in 2008.  The transition from stage to screen is not always smooth, but Letts has achieved it without a hitch.  Most of the action takes place in the family home, a beautifully landscaped colonial mansion in the countryside near a lake, or in the cars of the arriving family members.  Clues about the underlying conflicts are seen from the beginning in the interactions between Violet (Streep) and her husband Beverly (Sam Shepard), followed by the arriving sister Mattie (Margo Martindale) and husband Charles (Chris Cooper) and each of the daughters’ families.  In the process of the unfolding drama, the viewer experiences the trapped feeling that each of the characters suffers from; at one point, a character says to another who is running away, “Where are you going?  There is no place to go!”  And we feel trapped as well because the action is so powerful.  Also because, in a larger sense, we identify with the fact that we are always a part of the family to which we belong; there is not ever, really, any escape.
John Wells, the director, has performed his function of creating a work of art from all the components of the film, with the actors and other crew, such as the cinematographer Adriano Goldman and musician Gustavo Santaolalla, whose work illuminates the ongoing drama.

Clearly August:  Osage Country will be prominent in the upcoming award circuit soon to take place.

Posted by donnarcopeland at 9:18 AM