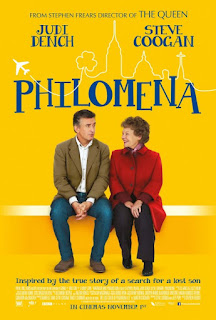 Philomena is a detective story, in a way, that involves Philomena (Judi Dench) trying to find the son whose birth she has kept secret for 50 years, and whom she was forced to give up when she became pregnant at a young age.  But it is also about religious faith, the ethics of journalism, aging, and forgiveness.  When she decides to tell her secret, Philomena is an old woman, and by chance, her path crosses that of a journalist (Steve Coogan) who needs a job.  Human-interest stories are far from what he wants to do, but he has no choice.  So the two become partners in trying to locate the son.
As the story unfolds, we find out more and more about Philomena’s life as well as her son’s.  The journey takes them from Ireland to the U.S., where they stay longer than they intended because the story keeps pulling them along.  The story, which is based on real people and real events (The Lost Child of Philomena by Martin Sixsmith) is the strongest part of the film, along with the two actors, Dench and Coogan.  They have that wonderful chemistry, where they clash and bounce off one another and then have moments of deep compassion and understanding.  Steve Coogan wrote the screenplay with Jeff Pope, and it is truly a work of art in its depiction of life and people in a fascinating reality.
Stephen Frears, the director, has films of high quality to his credit, some of which have become hits, and I think this one will be very popular as well if it receives wide distribution.  Philomena combines intrigue, humor, strong emotional pulls, and life experiences that most people can identify with and relate to.  Moreover, it probes a bit into religious beliefs and practices that will evoke strong differences of opinion, just as it does between Philomena and Martin.  In the end, viewers will likely side with either Philomena on the side of forgiveness or Martin on the side of outrage, but in any case, are very likely to leave the theater feeling very moved and upbeat.

This story is based on real people and real events.