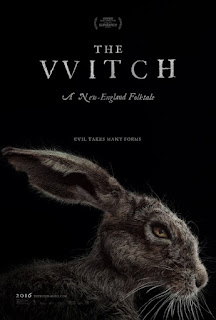 The Witch is a horror film par excellence.  Beginning with the dirge-like cello music that gradually transitions into dissonant screeching of the violins, the opening scenes are ones of dispute in which a family is essentially driven from a shared plantation sometime in the 1600s in New England.  They go willingly, holding to their principles, and have smugly pleased faces when they come upon what will be their own place, a verdant field next to a forest with a stream.  And suddenly a house and barn, crops, and domestic animals appear, and it seems that all will be well.
William (Ineson) and Kate (Dickie) have five children, Thomasin (Taylor-Joy), Caleb (Scrimshaw), Mercy (Grainger), Jonas (Dawson), and the baby Sam.  They all seem to pitch in with chores, although Mercy and Jonas (twins) clearly favor playing, dancing, singing, and horseplay to work.  Both Thomasin and Caleb are serious, thoughtful children who take their parents’ religion seriously.  It’s a fundamentalist type of belief, in which they must always be praying to have their sins forgiven.  Guilt is rife in the parents who frequently attribute negative occurrences to God’s testing their faith and punishing them for sins, and the two older children have internalized these lessons all too well.
The forest has a mystical, ghostly appearance to the family, especially to the mother, but of course it is seductive, and several family members cannot withstand its temptation.  This is especially poignant, since Sam suddenly disappears one day, never to be seen again, and it is assumed that a “wolf” has absconded with him.  This is torture for the parents who believe that he might not have gone to heaven.  Perhaps they thought he ought to have had “last rites” before he died, but I’m not sure.  They don’t even know if he’s dead or not.
Sam’s disappearance is only the first of many progressively horrible experiences the family will endure.  The film, written and directed by Robert Eggers, depicts so eerily well the gradual disintegration of minds into psychosis.  Accusations of sin and witchery abound, particularly focused upon Thomasin.  After this relatively long (but very good) set-up of family dynamics, really strange and horrifying things transpire, culminating in a truly fantastic scene.  Eggers has done an admirable job in managing the tension between reality and fantasy/metaphor, which keeps the viewer transfixed, wondering how it will all turn out, but—until the very end—it all holds together in the realm of plausibility (the place where most horror films lose me).  The horror and mystery here lies more in psychological phenomena than in material destruction—although that’s also present.  Eggers well deserves his award as Best Director at Sundance in 2015.
The main actors are gifted (and presumably well directed) in playing their roles, with Ineson as the father looking like a Jesus figure, Dickie as the mother a long-suffering wife, and Taylor-Joy as a young woman whose fertile imagination gets her into trouble and makes her the target of accusations.  Scrimshaw, Grainger and Dawson are naturals in their roles as younger siblings trying to understand the world around them.  Mark Korven’s music is uncanny in leading the viewer into scene after scene,  emotionally.

One of the best in the horror genre.