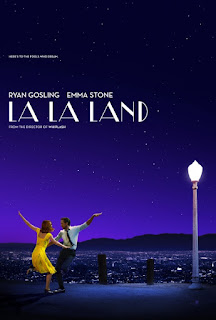 Would you like to visit an adult fantasyland for a couple of hours?  This movie will take you there with its entertaining and still meaningful script (by Director Damien Chazelle), its captivating, artistically presented cinematography by Linus Sandgren, songs and score composed and orchestrated by Justin Hurwitz, and two very fine actors (Gosling and Stone) who can sing and dance up a storm as well as act.   The talent going into making the film is truly impressive.  It is mostly light entertainment, but makes insightful points about choosing a career and whether or not to stick with original plans.  It also represents a contemporary dilemma for couples whose jobs take them in opposite directions.  I loved the playful ending’s toying with us by presenting alternatives from which we can choose.
Sebastian (Gosling) and Mia (Stone) seem destined to meet, after a hostile encounter on the jammed freeway, a chance meeting in a club, and a party.  They spar with one another, then dance together on a hilltop overlooking the twinkling lights of Los Angeles, and before long, they’re ambivalently hooked.  I say ambivalent because their first date to a classic movie, Rebel without a Cause, is just “for research.”
At this point, Sebastian is a struggling jazz pianist who takes a purist stance about the genre, and is finding it hard to get and keep a job.  Mia goes to one disheartening audition after another, in one of which the producer interrupts a gripping emotional sequence to take a phone call, then dismisses her.  (I understand this was based on an experience Gosling actually had.)
As their romance heats up, both get career opportunities.  Sebastian is invited to join a combo run by his old college friend Keith (Legend), and Mia writes a one-woman screenplay.  But after a time, they find they’re not spending much time together, primarily because Sebastian has joined the combo and is often away touring.  They have arguments and misunderstandings, although during the course of these, each one provides valuable counsel to the other.  She encourages him to follow his life’s dream of owning his own jazz club; he boosts her confidence by encouraging her to continue to pursue writing and acting.
We never know how things are going to turn out, but throughout the story their intermittent  songs and dances are electric (choreography is by Mandy Moore).  In these onstage performances, Gosling and Stone are so smooth they appear to have worked together for years, but this is only their third time to act together, and the first time in a musical.
And BTW, that's Gosling actually playing the piano; not a double or CGI.

La La Land is magical in its fantasy and in the artistry of all involved in the production.