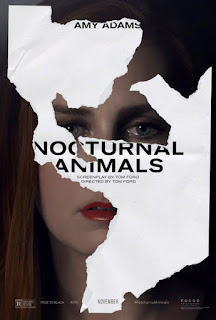 It’s paradoxical that a designer of beautiful things can just as well create the same measure of ugliness.  Tom Ford’s Nocturnal Animals is stunning both for its beauty (people, art, landscapes) and its depravity (grossly obese naked dancers, disgusting images and sounds, menacing characters).  I assume that this reflects Ford’s view of the world in that he can find beauty even in ugliness.
After the shocking opening scenes with the credits, we are introduced to lovely, gorgeous Susan (Adams) driving through the gate to her architecturally striking home.  Eye-catching works of paintings and sculpture abound, and we soon learn that she is the owner of an art gallery.  Her equally attractive husband Hutton (Hammer) arrives, and we’re soon looking at the other side of the beauty; she is cynical and he is angry, anxious, and avoidant.  Their relationship seems strained.
He flies back to New York for business, and Susan is left at home, alone because she let the help take the weekend off.  When she got home, she had opened a package from her ex-husband Edward (Gyllenhaal), which contained a copy of his latest novel, Nocturnal Animals.  The two had not spoken in years, so she was curious about why he had sent it.  But as she read it over the weekend, it became clear to her.
Most of the film thereafter jumps back and forth between Susan’s life now, with flashbacks of an earlier time when she was married to Edward, and to a movie of the novel.  The main character in the novel is Tony Hastings (Gyllenhaal as the character as well as the author) who, with his wife and daughter, are terrorized by “nocturnal animals” in the middle of the night on an isolated road on their way to Marfa, Texas.
The novel has maximum impact on Susan, pulling up her memories and guilt about her first marriage and how she left it, and feeling threatened by Edward’s sending it to her.  Amy Adams’ performance is probably one of her best—much more impressive than in her other current release, Arrival, although she is outstanding in that as well.  The reason lies mostly in the difference between the two characters, one a scientist, the other a gallery owner with a complex history.
The gifted actor Jake Gyllenhaal likewise pulls off a difficult challenge of portraying two different characters who have some similarities, but one is something of a pansy, whereas the other is more layered in temperament—a super nice, sensitive guy who has deeply vengeful thoughts and impulses that are terrifying.
Reflecting Ford’s penchant for mixing up the good with the bad, the sinister character Ray (Taylor-Johnson) embodies the psychopath on the road who puts on an act of being rule-bound, polite and charming, but in reality is exceedingly cruel and twisted.  He and the policeman Carlos (Shannon) will send chills up your spine.
Nocturnal Animals is exemplary as an art house film, one that doesn’t hold back any image, action, or state of mind, but covers a wide range of same.  That means it’s not always enjoyable or that it’s for everyone.  But Tom Ford’s script and direction, the cinematography (Seamus McGarvey), the music (Abel Korzeniowski), and the acting (Adams, Gyllenhaal, Taylor-Johnson, Shannon, Linney, and the rest of the cast) all come together to form a gripping production.

Hold onto your seats; this one is big, bad, and beautiful.

Posted by donnarcopeland at 1:42 PM