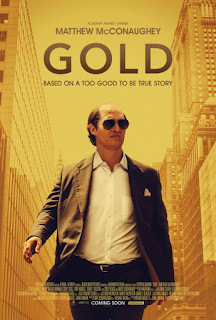 Paunchy, bald, and with a huge beer belly, McConaughey is practically unrecognizable as a prospector in Gold.  Stemming from a dream he had one night, Kenny Wells, an employee of Washoe Mining Corporation, is convinced there is gold in Indonesia.  He does some research, then flies over to contact geologist Mike Acosta (Ramirez), who has previously found gold there.  Wells is a fast-talking salesman type, and finally convinces Acosta to join him in prospecting a new location that Acosta knows about.
After scrambling for money from investors, the two start their operation, only to run into major problems with worker dissatisfaction, malaria, and Indonesian government interference.  Ramirez has to step in more than once to rescue the operation.  At one point, investor company Brown Thomas offers a strategic alliance, but cocky Wells refuses.  He is so confident, he boasts, “The last card you turn over is the only one that matters”; he is sure he will turn over the winning card.  At times during the film, it seems like this is a prophecy; at other times, it’s also a prophecy.
Gold does a really fine job of illustrating the old story about the ups and downs of investing in commodities.  When Washoe makes it onto the New York Stock Exchange, it looks like Wells and Ramirez have it made.  One of the themes throughout is that it’s always important to have a back-up plan, and across time, this becomes readily apparent to all the major investors, particularly Wells.
Ambiguity is another running theme:  Who are the good/bad guys?  Is this turn of events a good or bad thing?  Will what is found be valuable or worthless?  Can the Sukarno government connection be trusted?  Questions such as these keep the suspense going, particularly since the script calls for swings back and forth.  It’s never predictable how things are going to turn out, and even at the very end, viewers will have questions.
McConaughey is a well known gifted actor with 50 awards and 67 nominations, and he is up to his best in Gold—as repulsive as his character often is.  I admire the “hunk’s” willingness not only to be cast as this kind of figure, but to gain 50 pounds and look bald for it as well.  Ramirez is a fine match for him, often coming across as the stronger figure, the rescuer of the McConaughey character.  Supporting actors are strong, although Howard’s character is not prominent; but Kebbell as the FBI agent questioning Wells, Keach and Stoll as canny investors, and Greenwood as a spoiler enrich the production.
The experience of screenwriters Patrick Massett and John Zinman has primarily been in television, and this factor may underlie my sense that it comes across as a bit contrived, despite the high level of suspense maintained throughout.  Stephen Gaghan’s excellent direction mostly overcomes this drawback, but still implausibilities or at least questions of “How can that work?” remain.  Especially in the last scenes of the film.

Will this dreamer survive the prospecting ups and downs?

Posted by donnarcopeland at 12:19 PM