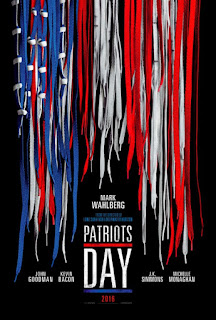 A dramatic account of the 2013 bombings at the Boston Marathon refreshes our memory of what happened that day and the investigations to find the perpetrators that followed.  It’s fascinating and informative to see how the rescue and investigation proceeded, and how quickly the suspects were identified with security cameras.  With that information in hand, a police officer knowledgeable about the area knew where to look for them.  There was disagreement initially among the FBI and city/county/state officials about when to release the names, but as soon as they did, they began to get leads.  (The FBI preferred to withhold the names so as not to tip off the bombers and allow them to escape.)
The film gives us glimpses of some people’s lives beforehand, such as Sgt. Tommy Saunders (Wahlberg) who had been temporarily suspended from the force, some of the victims, and the Tsarnaev brothers, the bombers.  This helps make the shock more real and important to us, and gives us a glimpse into how private lives are affected (tragically, sometimes) by civic duties.  The most dramatic of these is when the Tsarnaevs on the run hijack a car driven by a student (Yang) whom we’ve been introduced to earlier as a son talking to his family in China and to his friends.  Dzhokhar (Wolff) and Tamerian (Melikidze) Tsarnaev are shown to be bumbling and argumentative in their execution of the terror and their attempts to get away.  In the aftermath of the explosions, it’s eerie to see them at home watching TV reports of their work, and Tamerian sending Dzhokhar to the store on an errand.
Peter Berg, the director, moves the story along, with frequent cuts—sometimes so frequent it makes you dizzy—but covering the scope of the massive event well, including preparations for the race and some of the back stories, law enforcement during the race, the bombings and chaos that followed, the rescue, and finally the investigation and pursuit of the criminals.  There is an especially interesting interrogation of the older Tsarnaev’s wife by the FBI.  It did not produce much information, but showed the FBI’s expertise in connecting with someone to elicit information.
No one character really stands out, although Sgt. Saunders seems to turn up at every important event.  Wahlberg’s performance is not as outstanding as in some of his previous work, although it is adequate, and it could be that the writers/director wanted a lower key persona for this role.  Experienced actors in supportive roles that measure up to their reputations include J. K. Simmons, Kevin Bacon, John Goodman, Alex Wolff, and Michelle Monaghan.  Relative newcomer Themo Melikidze playing the older Tsarnaev is entirely convincing.

A reminder of the fateful day in 2013 when two brothers wreaked havoc in Boston during the marathon.


Posted by donnarcopeland at 2:56 PM