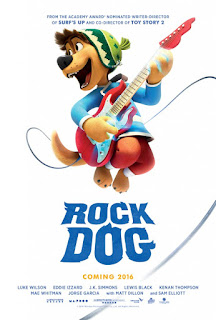 Rock Dog is a Chinese-American 3D computer-animated film, based on a popular Chinese graphic novel, Tibetan Rock Dog by Zheng Jun, a Chinese rock star.  The film originated in China and has Chinese backers, but is directed by American Ash Bannon and animated by an American studio, Reel FX.  It’s a great movie for children, with its simple but heartwarming story and thoughtful treatment of stealing, fear mongering, mistrust and hatred of strangers, honesty, and pomposity.  The characters and sets are well drawn, with sharp lines and bold colors.
Bodi (Wilson) is a mastiff living on Snow Mountain with his father who wants him to follow in his own footsteps and become a guard against wolves in a community where sheep production and products is its main industry.  Wolves haven’t attacked in years, but Khampa (Simmons) wants to be prepared just in case.  Actually, the wolves have stayed away from Snow Mountain because they heard that Khampa had recruited and trained a huge army of dogs for protection.  In fact, Khampa has simply dressed up sheep to look like ferocious guard dogs—a twist on the admonition, “Beware of wolves in sheep’s clothing”—a clever joke for adults in the audience.
The thrust of the story is about Bodi’s wanting to pursue his own dream of being a musician and “finding my band.”  Khampa is disdainful of this idea and uses all kinds of ruses to make Bodi change his mind.  But Bodi has an advocate in his father’s friend, Fleetwood Yak (Elliott), who counsels the father to allow his son to go to the city and chase his dream.
Bodi has been further encouraged by his listening to a radio that was accidentally dropped from the sky out of an airplane, landing right in front of him in a meadow.  He turns it on and is thrilled that it has rock stations playing music all the time, as well as interviews with stars.  One of these is Angus Scattergood (Izzard), a current rock idol.  Bodi is sure Angus is talking directly to him in his encouragement to play, play, play his guitar, and success will surely come, just as it did for Angus.
When Khampa finally gives his permission for his son to go to the city, Bodi goes and looks for Rock Park where musicians hang out.  He meets a trio, and one teases him by advising him to go to Scattergood’s house and be extremely persistent in getting the star to give him music lessons.  The naïve Bodi takes off immediately.  Of course, this is dangerous, because the star has rigged his house with electrical wires and booby traps to keep visitors away.  But through complicated events, persistence, luck, and his good nature, Bodi gets through the door.
This is not enough, however, because proud, pretentious Angus is horrified at the thought of mentoring anyone so humble.  To make matters worse, Bodi is being chased by urban wolves led by ruthless, unscrupulous Linnux (Black), who wants to use him to blackmail Khampa and gain entrance to Snow Mountain.  Fortunately, Bodi’s good nature wins him friends and support from two of the rock musicians he met in the park and even Angus’ robot butler, Oz, so he still has a chance to fulfill his dream.
Rock Dog, directed by Ash Bannon, is well paced for children, is the right length, and uses mixtures of adventure, thrills, and emotional elements to tell a good story.  Music by Rolfe Kent is effective, especially the song, “Glorious” (composed, produced, and performed by Adam Friedman).

Posted by donnarcopeland at 2:50 PM