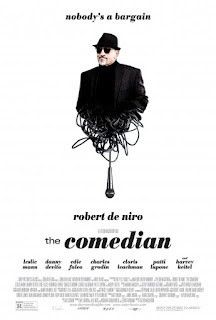 Being truly funny takes talent, and The Comedian misses the mark; there are a few out-loud laughs in it, but mostly it tries to be funny by saying outrageous things nearly always with a sexual reference.  The movie won’t grab you.  Actually, the story is more interesting than the jokes.  Jackie (De Niro) is looking washed up as a comedian with a television sitcom, “Eddie’s Home”, which people have so identified with the actor they want to call him Eddie off stage.  And they either want him to entertain them with more Eddie on the spot (most annoying for him) or try to impress him with their own rendition of the Eddie character.
Jackie has gotten a lot of mileage as a stand-up comedian with insults that are supposed to make people laugh, and in his audiences there are as many horrified looks as there are chuckles.  (I suppose we’re supposed to think that is funny as well.)  He’s having a hard time winding down, and as a result has major anger issues, which land him in the clink.  He just can’t shut his mouth.  His agent (Falco in a fine performance) is patient with him as the daughter of his former agent, even though she is the frequent recipient of his bile.  She tries her best to get him to shape up and not insult the people she has gotten to hire him.
During his post prison community service gig, his path crosses that of Harmony (Mann) with the same anger issues and a daddy complex.  Daddy is wealthy Mac Bernstein (Keitel), whom Jackie finds largely offensive, and the feeling is mutual.  Harmony is resistant to Jackie’s charm—which he can turn on—and his subtle advances, but she finds his comedy so endearing, she weakens.
The Comedian has a fine cast who are all at their best.  De Niro, Mann, and Keitel are entirely convincing in their roles.  Leachman is wonderful in her sharp comebacks and the portrayal of a very old star.  De Vito and LuPone make a great older Jewish couple just wanting to give their daughter a beautiful wedding and trying to tolerate Jackie’s dependence on them.  But the deficient script by Art Linson, Jeffrey Ross, Richard LaGravenese, and Lewis Friedman gives them little that actually works, further handicapping the work of Director Taylor Hackford.
There is a major surprise towards the end, which is meant to give some punch to the emotional and relationship issues, but the very end is marred by blatantly copying the pièce de résistance from another well-known film not so long ago.

This is a rather mundane tragic tale of a comedian.