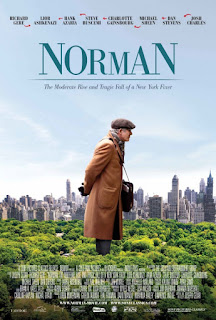 A fast-talking con artist, Norman Oppenheimer (Gere) never takes “No” for an answer and always seems to manage to get his foot in the door one way or another.  He dreams up more ruses for getting his way than any normal person could, always working on the premise that he can be of help to the other person—usually by introducing them to someone else.  He calls himself a businessman, but the exact nature of this business is never clear.  He whips out his ambiguous business cards continuously, urging the other to call on him anytime.
Through a fateful encounter that Norman exploits at just the right time in the life of one of his marks, Israeli Eshel (Ashkenazi), a strange friendship is formed, and Eshel remains grateful to Norman for an act of kindness even after he is elected Prime Minister of Israel.
Norman continues to work his machinations on his nephew Philip (Sheen), a wealthy man’s aide Bill (Stevens), his rabbi (Buscemi), and Alex (Gainsbourg), an attorney in American-Israeli affairs.  He lies continuously, but manages to keep everyone on the hook, and occasionally is successful in his strategies to get people together.  But most of the time, he gets kicked out of homes, offices, and even the synagogue.
Much of the movie is uncomfortable to watch, as Norman spins his tales and we see him lying without compunction; but then, the story takes a turn when Eshel and Alex come to the forefront and the movie becomes a thriller, at the heart of which (surprise!) are ethical questions and dilemmas.
Which is more honorable?  To betray a friend in the interest of peace for millions of people, or to refuse to betray a friend, no matter the cost?  This rewards us for sitting through the extended set-up that appears at first to be a typical story of a con game, but turns out to be a study in character with ethical/moral considerations.
Writer/director Joseph Cedar (Campfire, Beaufort, Footnote), is not well known in the U.S., although he was born here, then moved with his family to Israel when he was young, returning at some time later to attend film school at New York University.  His Norman screenplay contains the elements one hopes for in this genre—three-dimensional characters, complexity and thoughtfulness in plot, intrigue, suspense, and just enough ambiguity in the ending.  His direction is sound in pacing, focus on story elements, and achievement of a unified whole.
This may well be one of Richard Gere’s best performances, where he is almost continuously onscreen and must show subtleties in his character, convincing us of his conflicted goals and aspirations and, above all, revealing the poignant loneliness underneath.  In apposition to Gere, Lior Ashkenazi plays the experienced yet naïve politician whose goals are honorable, but needs forces of discipline close to him to keep him on track.  His compromise is worthy of discussion after the film.  I always love Charlotte Gainsbourg’s acting skills, and here she provides the mysteriousness and real threat needed.
Norman is a bit slow in the beginning, but that may be necessary to adequately set up the intrigue and drama to come.

The art of the con and its sometimes strange and surprising consequences.

Posted by donnarcopeland at 3:38 PM