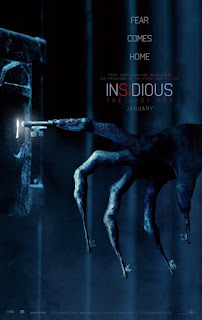 We meet the Ranier family living in Five Keys, New Mexico, in the ‘50s, and find that things are not well, especially with young Elise (Ava Kolker and Lin Shaye), whose father becomes brutal when her special powers are in evidence.  She refuses to lie by saying she doesn’t see ghosts, so he beats her and locks her in the cellar.  (There are a number of weaknesses in the film, one being very bad parenting.)  As time goes on and the situation worsens, Elise does what any sensible young woman would do, she leaves home.  Elise is guilt-ridden for leaving behind her younger brother Christian, ignoring the fact that she was only 16.

Jump ahead to 2010, and Elise is an older woman now having nightmares.  Her gift of seeing bears some responsibility, as she was told by her mother years before, and when people call her to conjure away the ghosts in their houses, she goes.  The latest call is troubling, however; it is from a current resident in the house in New Mexico where she used to live.  This is both terrifying and challenging, but she is stalwart, so sets off for New Mexico with her two helper/roommates, Tucker (Sampson) and Specs (Whannell), two geeky psychic wannabes.  (They’re supposed to provide the humor, but it seldom works.)
What they find there is horrendously gruesome, and the plot becomes more and more convoluted with additional characters and resurrections of previous ones.  Elise is committed to her calling, and comes to understand the power of evil spirits in inhabiting humans for their own purposes.  (This is a way of explaining certain evil men’s actions—which I have to smile at.  The men are not evil; it’s the spirits within them.)
There will be lots of blood, gore, and murder to satisfy the horror genre fan, but the film will be tedious for those who have questions that pop up, like, “Why doesn’t Specs call the police when there is a man with a gun in the house?”  And when one suitcase after another is opened with little scares, you know that soon there will be one that will draw gasps from the audience.
Lin Shaye is a talented actress who has starred in all the Insidious films, and she is expert in mixing the wonder, wisdom, care, and concern that her character needs to show.  If this film has any redeeming value, she is it.  Alas, the filmmakers’ efforts to imbue the Tucker and Specs duo with levity simply comes across as corny and even lecherous when they noodle up to Christian’s two young attractive daughters, whom we know in real life wouldn’t give them a second look.
Insidious:  The Last Key seems to be one of those serials that the filmmakers just don’t seem to want to let go.  They appeal to people who are inclined not to think too deeply, but need a few thrills to make their lives complete (or so they think).

Only hard-core fans of the Insidious series will like this film; others should stay away.