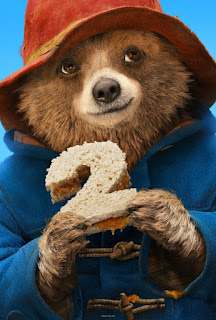 This adventure centers around an antique book about London which Paddington (Wishaw) discovers in Mr. Gruber’s (Broadbent) shop, and wants to send to his Aunt Lucy, who has always longed to see London.  When Paddington learns that it is valuable, and he’s going to need lots of money to buy it, he immediately looks for work.  The barbershop doesn’t work out so well after the electric shears get the best of him, but he discovers he is an excellent window cleaner and works diligently with amazing acumen cleaning the windows of multi-story buildings.  And he gets close to being able to buy the book for his aunt.  Wherever Paddington goes, as we know from the earlier book and film, he charms everyone with his Aunt Lucy-isms (e.g., “If you look for the good in people, you’ll find it”) and helpfulness.  But this is a substantive kind of charm, illustrating so well how politeness, diligence, and seeing the good in others changes them.
The story is not just about “nice” things, however; there is a villain named Phoenix Buchanan (knavishly played by Grant) who exploits what he hears from the innocent Paddington.  Putting that information together with what he already knows (that there is a valuable pop-up book that has been missing for years), he concludes that it could solve all his financial and professional problems.  (His magic acts have been failing and he is drowning in debts).  We get to hear about the history of the book and how it came to be, which is an interest heightening segue).
From here, the story transforms into more of a thriller, with Paddington being accused of a crime, tried, and put in prison.  This takes all the resources of his beloved Brown family (Sally Hawkins, Hugh Bonneville as parents), as well as friends he has made in prison, such as the grumpy cook Knuckles (Gleeson). (Paddington won him—and the other prisoners—over with his marmalade sandwiches.)  Along with his family, these newly made friends promise to exonerate him.  After seeing how well Paddington navigates the prison system, things take a turn, after which, we have some nail-biting scenes involving a prison break-out, trains, and near-drowning that make the film into a thriller.
Paul King, director, and writer with Simon Faraday, based on Michael Bond’s story, has scored again with a Paddington story that interests and thrills viewers, along with providing thoughtful observations about humans and how we function.  They are optimally aided by musician Dario Marianelli and cinematographer Erik Wilson, along with a plethora of artists in production design, sets, costumes, and special effects.  The actors (Sally Hawkins, Hugh Bonneville, Hugh Grant, Julie Walters, Jim Broadbent, Brendan Gleeson, et al) bring it all to life in a way that is entertaining and thought-provoking for children and adults.
It’s so rewarding to see a film with so much humane, visual, aural, and technological artistry.  Would that all so-called “children’s” films were of such high quality.

Before the intense adventure, there is warmth and loving connections.  What could go wrong?

Posted by donnarcopeland at 7:25 AM