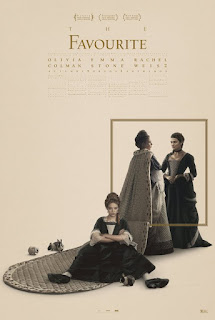 I must confess, I did not love The Favourite.  It is easy to discern why others are entertained, but I tired of the portrayal of a moody, whimsical queen so easily led on by her ladies in waiting.  Most refreshing in the story are her sudden flashes of insight on occasion that take her subjects—particularly these very ladies—by surprise.  But I tired of their duplicitous fawning while concealing their own driving ambitions for power. It reminds me too much of the typical perception of women in power being easily duped, often by close [female] associates.
The production, directed by Yorgos Lanthimos based on a screenplay by Deborah Davis and Tony McNamara, is a farce about the royal court in 18thCentury British aristocracy when Queen Anne (Colman) reigned, at first with the private counsel of her “lady of the bedchamber”, Sarah Churchill (Weisz), Duchess of Marlborough.  In this story, the Duchess wields considerable political power, along with her husband, the Duke of Marlborough charged with directing the army.
Enter a relative of the Duchess, Abigail (Stone), who has fallen upon hard times, and being intelligent, educated, and ambitious, she begins to maneuver her way into court.  Sarah is well schooled in handling intruders, and immediately puts her in her place. What she doesn’t anticipate is an equal capable of challenging her and winning over the queen.  What follows is a battle of wits between the two women and the unpredictability of the Queen’s favor.
Right off the bat, the three actresses, Colman, Weisz, and Stone, prove their considerable talents and carry the film.  Colman perfectly captures a person in charge who only sporadically wields her power, while being susceptible to flattery, attention, and physical comfort.  She can whine with the best of them and then turn on a dime and exert autocratic power.  Weisz plays the most interesting character in her blending of political knowledge, skill in the art of manipulation, and an apparent genuine caring.  Stone does a great portrayal of an interloper who knowingly scans the territory, assesses where different powers lie, and can convey sincerity without warmth.  These actresses are already being slated for nominations and have actually received awards for their performances.
Clearly The Favourite will be a 2018 favorite, maybe even more so than Lanthimos’ previous films that were hits, The Lobster and The Killing of a Sacred Deer, both of which I loved. My problem with this film is as I stated above, is that it is a little too pat in portraying women’s records of power and their relationships with one another.  It turns out that whereas earlier accounts of Queen Mary’s reign emphasized her illnesses and other weaknesses, subsequent historians have given her more credibility.  She attended more cabinet meetings than those who came before or after her; more artistic literary, economic, and political advancements were made during her reign; and she supported the union of England and Scotland, which became Europe’s largest free trade area at the time.  No weak willed Nellie she.  It’s something of a pity that she is portrayed so weak in a 20thCentury film.

For a romp in an 18th Century royal court where intrigue is rampant and women compete for power, go see The Favourite.