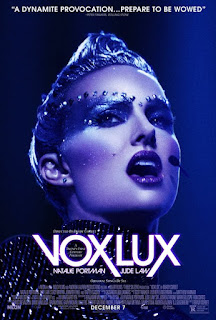 “Don’t let your kids grow up to be rock stars” could be the theme of this film. Natalie Portman is her usual stunning self in this glittering picture written and directed by Brady Corbet (previously an actor in Martha, Marcy, May, Marlene, Clouds of Sils Maria, and Force Majeure), and now venturing into directing.  The picture starts with a tragic scene in a school in which Celeste (Raffey Cassidy as the younger and Portman as the grown-up) is shot, injuring her spine.  She is a talented, thoughtful young Christian, and to cope with the tragedy, composes a song with her sister Eleanor (Martin), which offers encouragement and solace to all those involved.
Celeste undergoes rigorous rehabilitation, and during this time, the song has become a hit not just in their hometown, but across the nation as well, all of which results in bids from people wanting to be Celeste’s manager, one of which is “The Manager” played by Jude Law.  A publicist played by Jennifer Ehle is engaged as well.
A bit of sibling rivalry between Celeste and Eleanor runs through the story, but for named reasons, Celeste becomes the star and Eleanor goes with her as her older sister/caretaker, but who remains active in writing songs.  She also becomes a kind of foster mother later for Celeste’s daughter Albertine (Cassidy again in this role).  Plausible family dynamics are woven into the story of Celeste’s rise to fame, enriching the plot.  But while Corbet pays attention to this important aspect, the main thrust of the story is Celeste’s meteoric rise in popularity, her physical/psychological/social vulnerabilities, and the penultimate outcome. Penultimate, because the ending leaves you guessing.
Natalie Portman gives her all to this performance, as she did in Black Swan, a role which is similar to this one in its story of a talented young woman being exploited by people in the entertainment business.  Both films are left open-ended as to the ultimate outcome.  Here, we see the arc of a rock star’s fame, the erosion of her values and central core, and the question as to whether her family (sister and daughter) can buffer her from the consequences of the path she has chosen.
A curious omission in this film is the absence of the mother.  She is nowhere to be seen in the film, and her absence is not explained.  This is unfortunate in that her absence could potentially account for some of Celeste’s journey and her relationship with her sister.  But we are given no information.
The film contains large gaps in time, requiring the viewer to fill in information [e.g., we’re not told about Celeste’s pregnancy; we see her daughter for the first time after she has grown up in the last half of the film (Cassidy in this role too, which is a nice touch)].  The narration delivered with gravitas by Willem Dafoe that occurs periodically helps a great deal in this respect and in making psychological/philosophical sense of Celeste and events in her life.
Significant assets to the film include the luscious, probing cinematography of Lol Crowley and the score supplied by Scott Walker, with songs by Sia, which are the ones Celeste sings onstage.  The finale is something to see in music and cinematography, and in peak emotionality.  A grande finale indeed, after you’ve thought that disaster was just around the corner.

A rock star born, launched, and riding the peaks and valleys of fame.

Posted by donnarcopeland at 12:39 PM