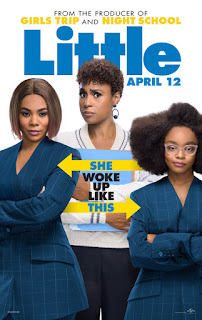 Little follows the premise that traits you had as a child follow you into adulthood.  I don’t know exactly why the filmmakers (writers/director Tina Gordon and Tracy Oliver) came to the conclusion that we needed a black version of Freaky Friday, because, as said in the trailer, “We don’t have time for that.”  Yet, here we are with another adult-child transformation as a means of promoting insight in an adult who has become narcissistic and demanding.
Jordan Sanders (Hall) has become a successful businesswoman after suffering humiliations as a teenager.  She thinks she has succeeded by devaluing everyone around her, even those who clearly care about her—especially her loyal assistant April (Rae)—so that she always ends up on top.
In a clever twist of fate, she encounters a young “magician” (Taylor) who, after Jordan is rude to her, dismissing her as a child (e.g., nonsignificant), waves her wand and proclaims that Jordan will be little again.  Which actually does happen at a critical time in Jordan’s company when its major sponsor is threatening to withdraw.
It throws the company into chaos—now in April’s hands to restore, since Jordan is reduced to being a child and must attend school.  We see April diffidently taking up the reins, Jordan trying to guide her as a child behind the scenes (literally, in her ear).  This becomes one of the best depictions in a movie of a talented assistant desperately trying to function as a prototype of a boss rather than using her own voice.
The film resolves all the troublesome situations in a fairly typical way, with those who need it developing insight and those deserving recognition getting it—all with a few laughs about human foibles along the way.
The stars Regina Hall and Issa Rae are outstanding in this production. Your eyes are on them the whole time, not just in what they are saying, but their capturing your complete attention.  They are the movie. It seems to me that the writing is simply not up to their star power.  It’s a script that hits the bases, but doesn’t inspire or amaze.

The stars are the reason to see this film.

Posted by donnarcopeland at 10:56 PM