THE BEST OF ENEMIES 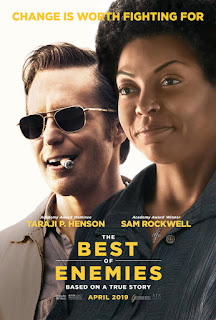 It’s 1971 in Durham, North Carolina, where segregation is still de rigeur.  C. P. Ellis (Rockwell) owns a thriving gas station where all the customers are lily white and, by the way, he is president of the local KKK.  But he is a good man, devoted to his wife, teenage daughter, and young son with Down’s Syndrome who lives in a psychiatric facility.  It’s just that he’s been taught that the races don’t mix and that blacks are inferior to whites.
There is a black activist in town, cheeky Ann Atwater, who clashes from time to time with Ellis and city council members at town meetings in her advocacy for blacks. It seems like there will never be a meeting of the minds, but then a fire destroys a school in town—one that only blacks attend.  In discussions about what to do until the school is repaired, one proposal is that the black students attend a white school.  This is the makings of a disaster when a black facilitator arrives on the scene.  That’s Bill Riddick (Ceesay), a diplomat par excellence, although it’s certainly not his title.  He has been sent by the NAACP to work out a solution.
Riddick is also efficient, and immediately organizes a committee to come up with a resolution to resolve the situation.  In a stroke of genius, he appoints two co-chairs.  Of course, they are C. P. Ellis and Ann Atwater.  [It sounds like a movie script, but this story is actually based on real people and real events as told in a book by Osha Gray Davidson (1996).]
At this point, the drama unfolds with crises, penetrating insights, and touching moments.  The story as a whole graphically and poignantly illustrates how human beings negotiate their conflicts and their lives in general.  It shows the unexpected, touching ways that individuals connect and help one another, along with the devious and even savage ways some will try to sabotage and punish even people they are close to on the basis of a religiously held belief.  Director Robin Bissell concludes this sometimes disturbing, sometimes inspiring story with rays of hope for the future.
The two main actors are phenomenal in their accomplishments playing such diverse characters.  I first became aware of Henson when she was a plump, honest and sincere, and clever cop on television’s “Person of Interest”, but she really came into her own in Hidden Figures and the TV series “Empire.” Here, she slips into an overweight, committed activist with a heart.  Rockwell is a similar chameleon, a jokester training a shy teen at a fun park (The Way Way Back), a policeman with mother issues (Three Billboards outside Ebbing, Missouri), and a former U.S. President (Vice) who can still pull off being a KKK president torn between conflicting values he has grown up with.  A big plus for the film is his explanation about what the KKK meant to him initially, and how he has come to question it.
Above all, this film demonstrates how people coming together and talking honestly with one another is probably one of the most revolutionary activities we ever experience.  My hope is that millions of people will view this movie and vicariously experience its benefits.

A most unlikely of friendships makes this film a winner.