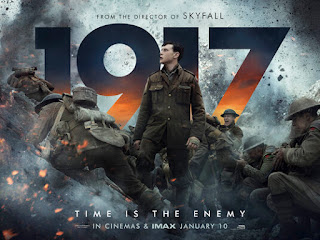 Be prepared to run for all you’re worth with the characters over all kinds of terrain strewn with friendly and enemy soldiers and feel continuing tension for almost the entire film of 1917.  Director and writer (with Krysty Wison-Cairns) Sam Mendes and his cinematographer Roger Deakins made an excellent call in filming the entire adventure in essentially one continuous take.  With the immediacy of the story, it pulls the viewer right into the screen, and you are there.
In France in the first World War, two young Lance Corporals, Tom (Chapman) and Will (MacKay) are sent on a mission to Colonel MacKenzie (Cumberbatch) with the urgent message to cancel a military charge where, unbeknownst to MacKenzie, a trap has been set by the Nazis.  Will and Tom will have to cross a no-man’s land of dead bodies and through enemy lines to get by all kinds of dangers along the way, and they have only a few hours to make it.  The charge is given with a special incentive:  Tom’s brother is one of the 1600 men in MacKenzie’s company who will be killed if MacKenzie proceeds with the attack.
Along with the script and direction, cinematography and music (Thomas Newman) are paired so seamlessly with the story they serve as sensory enhancements, intensifying the whole experience.  There are breathtaking scenes such as one at sunset when a soldier is sneaking through the sculpted forms of the remains of a bombed-out building, which Deakins has constructed to look like a morbidly colorful abstract painting.  The whole scene is heightened by the fear of being shot.  In this case, the music has unworldly sounds that give expression to the tension and fear.  Other times, there are sharp contrasts between the horrors encountered along the way and snow-white cherry blossoms wafting in the breeze or come upon in a host of trees felled by the Germans.
Another feat in this film is the production design (Dennis Gassner) and the creation of miles of military encampments, abandoned encampments complete with rats, and a bombed out building where a young woman and an abandoned child are sheltered with one candle burning brightly.  And much later on, we witness a contrast with a camp of British soldiers listening to one of their own singing the popular American folk song, “Wayfaring Stranger.”
The paradox of 1917 is in its graphic description of the horrors of war coupled with the visual and lyrical beauty in which the story is presented.  A late bloomer this year, 1917 may be at the top of more than one list in the upcoming award season.

Heroics are paramount in 1917, but the visual and musical enhancements and the brief, tender moments, altogether, earn it a place on the “must see” list.

Posted by donnarcopeland at 9:53 PM