STAR WARS: THE RISE OF SKYWALKER 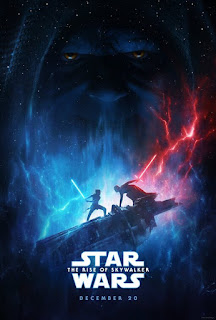 Star Wars fans should be pleased by this production, with its continuation of series themes and huge cast of characters, including the reappearance of Princess Leia, Luke Skywalker, Chewbaca, C-3PO, and R2-D2.  Rey (Ridley) is even more the focus compared to The Last Jedi, as her origins are announced and she finds that a certain someone has major plans for her, not necessarily to her liking.  She has completed her training with Leia, and is now considered a full-fledged Jedi.  Kylo Ren (Driver) is still pursuing her, and they have some spectacular lightsaber battles.  Palpatine the Emperor reappears, giving Kylo specific instructions to “kill the girl” and to “end the Jedi.”
Major intrigue among the Sith includes pretenders vying for Kylo Ren’s power, and minor skirmishes on the Jedi side between Poe (Isaac) and Finn (Boyega). Male competitiveness and striving for power continues unabated on both sides.  In this story, Rey is shown to be a fierce fighter, pitting her will against Ren’s in teeth grinding tug-o’-wars with their lightsabers, the veins in their faces and necks looking like they’re going to pop out at any moment.
In addition to the warfare and power struggles, there are tender moments, as when Leia passes her lightsaber on to Rey, romantic magnetism between pairs not always in sync with one another, wrenching moments when one on the Jedi side is taken prisoner, and significant losses on both sides.
Some of the charms of the movie include the insertion of quotable quotes by sage ones, e.g., “They win by making you think you are alone” and “The dark side is in our nature; surrender to it.”
Initial reactions to the movie are divided in opinions, with some on the side of “a perfect ending” and others thinking that J. J. Abrams has too many plots going at once, and failed to continue new threads introduced by Rion Johnson in The Last Jedi.  I found the movie to be exciting, with impressive special effects (such as the visuals in Palpatine’s battles and the visibility of the action within action scenes) and fine performances by the actors, especially Daisy Ridley.  Adam Driver’s talents are well documented, and when the two are in a scene together, it can be electrifying.  All of the other actors are engaging and convincing, with Ian McDiarmid presenting a truly formidable Palpatine combined with the special effects in his and Ridley’s contretemps.
John Williams’ music and Dan Mindel’s cinematography reflect their work in previous Star Wars films and other quality productions.  Despite some criticism, J. J. Abrams as director seems to have come through with another success in his repertoire.

Whether or not it’s true that this is the last installment of the Star Wars franchise, it is well worth seeing.