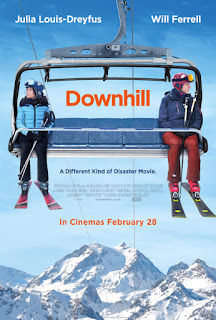 Contrasts--some bordering on contradictions--are the hallmark of Downhill (captivating music and cinematography against marital conflict, Americans vs. Europeans, and the two main characters, Peter and Billie, individually across time.)  This is the American version of Force Majeure (2014) by the Swedish director, Ruben Östlund.  Writer Jesse Armstrong with writer-directors Nat Faxon and Jim Rash follow the original script quite closely, but have “Americanized” the family in its conflicts and in its relationships with Europeans.  But the ending in the European version is more ambiguous, less clear-cut.
The story is that Billie (Louis-Dreyfus) and Peter (Ferrell) and their two boys are on a European skiing vacation, purportedly because Peter is grieving the recent loss of his father, and actually so they can boost up their relationship, which seems to be in a bit of a slump.  The couple is valiantly trying to maintain a cheerful togetherness when a “controlled” avalanche occurs while they are eating on the deck of a restaurant.  Billie’s and Peter’s versions of what happened next comprise another hallmark of the movie, contrast and contradiction.  How this is dealt with, interspersed with other events is the rest of the story.
I was a bit intrigued by the filmmakers’ portraying Europeans and Americans in stereotypically obnoxious terms, such as Americans’ readiness to sue and their—to Europeans—Puritanical values, and caricatures of the sexually uninhibited Europeans.  But in the end was turned off by both.  Such European and American stereotypes in the American version of the film are intended to be funny, but I find them excruciating.
Julia Louis-Dreyfus brings her considerable talent to her role, which is in stark contrast with her famous television personas in television’s “Seinfeld” and “Veep.”  Here, she is “wifey”, although she is skilled in manipulation.  And in contrast to that, Will Ferrell is a good choice for a husband who is unintentionally comedic, impressionable, and lacks a gram of self-reflection.
I did especially like the music of Volker Bertelmann, which captures the mood of every scene so expertly it and the cinematography of Danny Cohen transport us trenchantly to the snow-covered alps setting and the drama unfolding in its midst.
It’s too bad when American filmmakers do not trust their own creativity and resort to remakes of fine European films.  Downhill is an example of just that.  Directors Nat Faxon and Jim Rash have made beautiful films of their own (The Way Way Back and The Descendants), and there is no reason for them to “borrow” European films for a remake.

Given a choice, you would be better off seeing Force Majeure, a 2014 French film.