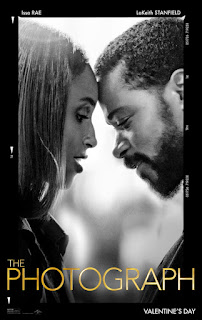 The most unusual technique in this film is that the life of the mother of one of the main protagonists is highlighted in accounting for a love story that transpires years later.  It works because the mother’s personality and her decisions (advanced for the time) are so fascinating.  Christine Eames (Adams) leaves her home (and the man she loves) in New Orleans to pursue her dream of making a name for herself in photography in New York. She leaves without saying goodbye to her love, Isaac (Morgan), assuming that he will be there when she returns.
We learn about that couple off and on in flashbacks.  But the immediate story is about Michael Block (Stanfield), a reporter for a magazine in New York, The Republic.  He is assigned to do a story about Eames, and goes to New Orleans, to interview Isaac, who talks about Christine and shows him some of her photographs.  That leads him back to the Queens Museum in New York where Mae Morton (Rae) is the assistant curator.
Much of the rest of the story is about Michael and Mae in a “will they or won’t they?” kind of scenario.  The fascinating part is how writer/director Stella Meghie weaves the two generational stories together in themes of missed opportunities that seem fated and the suggestion of a larger role that fate plays in humans’ lives.
The acting is exemplary for the most part.  Issa Rae in particular evokes mystery and beauty seemingly effortlessly. I have always loved LaKeith Stanfield, especially in Sorry to Bother You, but in this role he is not as effective, primarily because of the script, which has made his character less desirable (sort of shifty, unwilling to commit, unable to express emotion).  Writer/director Stella Meghie has created lead characters, both of them having a difficult time expressing themselves.  The characterizations of Issa’s mother and Isaac (played by Chanté Adams and Rob Morgan), as well as step-father Louis Morton (Vance) evoke our interest and make us want to know more about them.
I think the story presented is very romantic but in a muted form.  It moves a bit slowly, and is probably not the best choice for a Valentine’s date, although it will be opening on Valentine’s Day.

A “will they or won’t they?” romantic drama that is made more interesting by weaving in the parents’ stories.

Posted by donnarcopeland at 9:30 AM