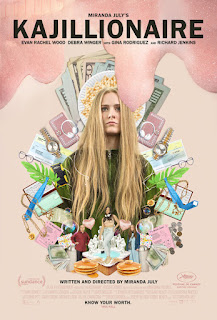 This is another one of Miranda July’s quirky movies (Me and You and Everyone we Know) in which grifter parents bring up their daughter to scam with the best of them. After taking acrobatic leaps and ducks to avoid the cameras outside a post office, Old Dolio (Wood) goes in, opens a mailbox, and after making sure no one inside can see her, she reaches in and steals an envelope from the box next door, being very careful not to drop it as she slides it into her own slot.  She then rejoins her parents waiting outside, and they explore their loot.

The parents are Theresa (Winger) and Robert (Jenkins) who are clearly surviving on whatever they can scam.  We accompany them in their nondescript clothes as they dream up more jobs, carefully avoiding their landlord who wants the rent checks.  They’re getting into the big time when Old Dolio comes up with a plan to use a prize (a trip to New York City) and when they return, make a claim on a lost bag, which mysteriously disappears.

Complexity is introduced during the flight home when the parents get acquainted with a fellow passenger, Melanie (Rodriguez), who is intrigued by their proposal to involve her in the bag scheme and split the winnings.  She is so opposite her age peer Old Dolio, in that she’s an attractive Puerto Rican who dresses sexily and is able to engage anyone in conversation.  They don’t seem to be taking to one another, with Old Dolio criticizing Melanie’s way of dressing, and though less judgmental, Melanie sees her counterpart as a bit odd.

The most interesting aspect of these characters is the mix in values.  Although they all have tolerance for scamming, they each have their limits, which are different one from the other.  How they react in the face of the death of one of their subjects starkly differs.  One is able to gently help in the dying process, one draws a line about how much they will scam, and another has guilt feelings afterwards, which need attending to.

The story then takes a sharp turn, with different alliances and twists in plot.

Miranda July seems to put her characters in a glass, so to speak, and shakes it up to see how they’ll turn out, and they never seem to end up as we expect. But sometimes, as in some of the characters in this movie, they ultimately bear out their stories of introduction.  Others shift and make changes to adapt to new situations.

Kajillionaire is a strange title for a group of low scammers; perhaps the dream of making millions is the key.  And although surviving on low stakes is a theme of the movie, it’s more about connections among people from different backgrounds searching for substance.

Quirkiness is a stamp of Miranda July’s movies, which are replete with enchanting characters.