THE TRIAL OF THE CHICAGO 7 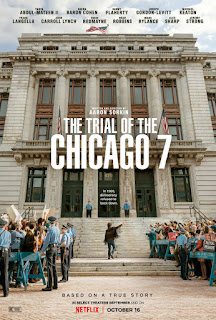 With a stunning cast of actors, Aaron Sorkin (probably best known for The Social Network, The West Wing and Steve Jobs) has written and directed what is likely to be one of the most important films of this year.  It’s been a long time since the 1960’s, but anyone alive then will vividly recall the turmoil surrounding America’s involvement in the Viet Nam War and the heated, controversial trial of the protesters after the Democratic Convention in Chicago.  Sorkin vividly describes who were the major players in that drama, the events leading up to the trial, and a detailed description of the trial in 1969 that lasted for 151 days.

The Government was at a disadvantage in bringing the case against the defendants. 1)  because it used the charge of conspiracy when the defendants had not made plans together; 2) one of the defendants was not acquainted with the others and had only been in the city four hours, 3) the judge who led the trial did so poorly he was later considered unqualified, and, finally, 4) politics got mixed in when Richard Nixon was elected President. Whereas the previous administration under Lyndon Johnson had concluded that the Chicago police actually incited the riot at the Convention, rather than the defendants, Nixon’s Attorney General, John Mitchell, was determined to find the protesters guilty.

During the film, we are shown revealing defense meetings, the trial, and clips of the protests, all of which make for exciting drama.  It should be said that some of the defendants (Abbie Hoffman, Jerry Rubin particularly) were colorful in their own right and were gleeful in their irreverence and playfulness with the authorities.  But others were respectful, like defense counsel William Kuntsler and defendant Tom Hayden, but who, at times, dropped decorum and stood firmly in their beliefs.

Along with the writing and direction, the cast comes through superbly in portraying their characters.  Eddie Redmayne as Tom Hayden repeats his past fine performances in depicting someone knowledgeable in the law, impulsive at times when his humanitarian buttons are pushed, but usually maintaining his composure.  Abbie Hoffman and Jerry Rubin, portrayed by Sacha Baron Cohen and Jeremy Strong, respectively, are a hoot, just as the real men were; so shocking you get surprised at their intelligence. I completely forgot the actors during their performances, which is saying a lot, since each is so prominent in very different current and recent roles.

It was great fun to see Frank Langella, long-time nominee with few wins, play the disingenuous judge for whom the whole proceedings were overwhelming.  I think he captured his role just right, and hope he is nominated for an overdue award.  Joseph Gordon-Levitt is also one perfectly cast for his role as the lead prosecutor who is young enough to have maintained the strong principles he acquired from law school, but well brought up in American values and social skills. He maintains a perfect balance between knowing what will affect his career while still adhering to his basic ethics.

Michael Keaton is another actor who always comes through with just what is needed. And in this case, in portraying Ramsey Clark (Johnson’s attorney general), he shows a man without many pretensions but having basic human values about the difference between right and wrong.  He will take personal risks to see that justice is done.

There are a dizzying number of characters thrown at the viewer right in the beginning, which requires good concentration.  Then, as the drama unfolds, you get caught up in it, both with your brain and your emotions.  It is an exceptional rendering of history that is reflective of real events as we experience them.  This is an informative as well as engrossing story to watch.  In light of today’s politics, it may be positive or sobering—we’ll see.  The film can be seen on Netflix.

Dip into a taste of history that can be seen as hyper-relevant today in this brief look back.