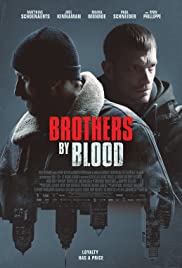 Peter (Schoenaerts) and Michael (Kinnaman) are certainly brothers by blood (and it could be brothers inblood), because not much else connects them.  They are very different people with different values.  We see them growing up in Philadelphia in families involved in gangs and crime.  Peter is the logical one, trying desperately—all his life—to escape the violence surrounding him.  Michael insists on continuing the wars that have gone on for generations. Peter gets him out of many risky situations, but he seems to be determined to act out the family’s penchant for the macho code.  The “brothers” are actually cousins.

Writer-director Jeremie Guez is considered a prize-winning writer of French noir stories of crime and intrigue.  The dialog he writes is terse and his plots are dark with a heavy emphasis on masculine stereotypes.  Brothers by Blood (originally titled The Sound of Philadelphia) is based on Pete Dexter’s novel Brotherly Love (1991).

The film is not an easy watch; it begins with a man relating a story about his prostate exam, followed by scenes of a crime showing wrecked cars, dead bodies, and police, all while credits roll.  In addition to these opening scenes that tell us little, overall. a major flaw in terms of storytelling is the darkness of the screen shots making it very hard to see what is transpiring, the absence of connections that will use the scenes you see to tell a logical story, and the introduction of characters who are not identified.  Much of this you have to figure out yourself perhaps many scenes later. An example is the sudden appearance of a small boy taking in the action around him, but it’s only later that you realize he is part of the main character’s reminiscences about his earlier life.

Matthias Schoenaerts is one of my favorite actors and the main reason I wanted to see this film.  He and Joel Kinnaman are indeed very good in portraying their characters as written.  But Peter is often portrayed as a Christ-like figure who is long-suffering and ever forgiving, making if difficult for me to appreciate his role, given this kind of movie.  But, at least, one of the ending scenes made me feel better about him.

This is a movie that will appeal primarily to those fond of macho crime films without much character development or attempts to clarify the make-up of the main characters.   Because I found little of it to be constructive or worthwhile, I cannot recommend it to most.

A film noir made primarily for those seeking the thrill of blood and witnessing the crime system in a major city.

Posted by donnarcopeland at 11:21 AM