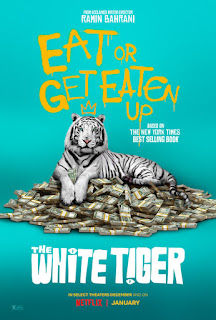 Rahmin Bahrani’s films are recognized for their relevance and social commentary in films such as 99 Homes, Man Push Cart, Chop Shop, and Goodbye Solo.  Here, he takes on the caste system in India, brilliantly illustrating its unfairness and how antiquated it is, along with the corruption found in the highest as well as the lowest rungs of society.  Along the way, however, he recognizes the values of humankind that have made whatever is worthwhile in the world exist.

Balram (Gouray) chafes at the arrangements in his small Indian town where a significant percentage of the earnings of common folk go toward influential relatives and bosses.  He makes a big point of how the people don’t seem to mind this (like roosters in a coop), and revere those holding authority over him.  At a young age, he decides to escape the system however he can. And eventually he must literally run from the community where his grandmother as reigning potentate is ordering him to prepare himself for an arranged marriage.

Cars and driving them have caught Balram’s eye, and being a budding entrepreneur he wheedles himself past the gate of a wealthy man’s home.  With his talent in salesmanship and charm, he manages to be hired as the second driver for the family.  Judiciously, he recognizes that the owner’s son Ashok (Rao)—who has been educated in the U.S.—is his best hope.  Indeed, he is taken on as “second driver” (the main driver, having been employed by the family since Ashok was a child), serving primarily Ashok.

Notably, Ashok’s wife, Pinky Madam (adeptly played by Chopra) is a cheeky American by whom Ashok is a bit intimidated.  He clearly is coming from the viewpoint that everything from America is better than anything in India.  The two seem to be in the first throes of love and interested more in having a good time in life than in anything substantive.

The contrast between the two of them and Balram (reverant toward religion and societal values) is striking, the consequences of which will play out through the course of the movie.

As a testament to Bahrani’s and novelist Aravind Adiga’s perspicacity in weaving the story about sociopolitical systems, we get an informed commentary on the relationship between slaves and their masters—the naïve reverence of the uninformed worker and the outright indifference of those in power. Framed in Balram’s personal experience, the drama will hold the viewer’s rapt attention, both with an interest in learning what will happen to him, and the overview of a society that rewards entrepreneurship over traditional values.

If nothing else—even ignoring the social-political commentary—The White Tiger will be an exciting, interesting experience.