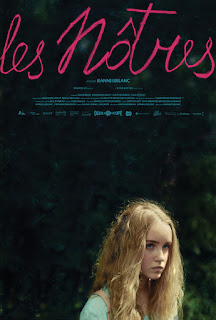 This story will put a chill in any mother’s heart.  It shows a reality that is hard to believe, even though we all recognize that it springs from truth.  I’m not sure, but I figure that the 13 year-old girl shows a kind of heroism and strong character that is uncommon in one so young.  This is not to say that I think the choices she makes are the best ones from my point of view, but I do admire her strength in following her own instincts about her own life.

Emilie Bierre’s performance reflects unusual talent and training in her ability to convey what her character Magalie is thinking just with her eyes and facial expressions.  She plays a quietly rebellious figure who is nevertheless still only 13 and susceptible to some kinds of coercion, even though she is likely to thwart any adult trying to force her to do or say what they wish.  She responds much more readily, however, to gentle persuasion.  Unfortunately, her mother (played so convincingly by Marianne Farley) does what is probably typical of protective mothers, yelling at and trying to force an obstinate teenager into compliance.  Another mother—neighbor and close friend of Magalie’s family, Chantal, does a bit better with her son and with Magalie, but she still shows a tendency to tell a teenager she knows best even while conveying sympathy.

Another important figure is the mayor of the town, played by Paul Doucet, who is Chantal’s husband, and a mentor to Isabelle.  He seems to be someone who is always ready to lend a helping hand. He is highly respected in the small community, where everyone seems to know everyone else, and he is considered something of a hero after the town was inundated by a huge construction project that killed Emilie’s father.

Directed and co-written by Jeanne Leblanc with Judith Baribeau, Les Notres (Our Own) has already started receiving awards for the production.  These two women beautifully convey heartfelt commentary on people in a small town in Canada (similar, I’m sure, to small-town America) who are flawed (sometimes seriously) but trying to do their best in the families they love while coping with a challenging social problem. Also typical of small towns is an unwelcoming stance toward people who look different from the residents and are likely to be scapegoats for things the community doesn’t want to face.  As with good movies, this one leaves the viewer with some unanswered questions that are worthy of discussion after seeing it.

A gripping story of small-town life, its good points and its flaws, told in a drama about one teenager, which reflects the community as a whole.

Posted by donnarcopeland at 9:25 AM