THE CONJURING: THE DEVIL MADE ME DO IT 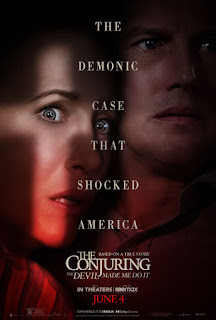 Those who have followed the Conjuring series of films are familiar with the husband-wife duo of a demonologist (Wilson), Ed, and his psychic wife,Lorraine,  (Farmiga) who set up their equipment on site wherever there are clues or trouble.  In this instance, there is trouble in the Glatzel family where young David seems to be possessed.  It’s one of those cases where a child is happy and well-adjusted, jumping happily on a newly found waterbed, when he is suddenly seizing and thrashing around and developing demonic qualities.  A priest has been called in for an exorcism, but when it doesn’t seem to be working, Arne (O’Connor), the beau of David’s sister Debbie, whom he adores, speaks to the devil, asking it to transfer the curse to Arne.

This transfer complicates everything, and Lorraine and Ed go to all kinds of eerie settings in search of clues, which include a rat-infested area under the Glatzel’s house where a witch totem is found, the home of a retired priest who studied Satanists and knows about this particular totem, and a mortuary where the dead body of a cursed young woman is revivified.

All during these searches, other significant events are occurring; namely, Ed’s heart attack, Lorraine’s near-death experiences, and Arne’s imprisonment and trial for murder.

This is over the top for me personally, but the audience in the screening I attended applauded afterward.  To each his/her own, and for horror fans, it may be that this movie might be just the ticket to thrill and chill.

Vera Farmiga (Bates Motel, Up in the Air) and Patrick Wilson (Fargo, Angels in America) are accomplished actors who elevate what could be a ho-hum story into an engaging tale.  Their supporting actors (Ruairi O’Connor, John Noble, Sarah Catherine Hook, and Julian Hilliard) are commendable and forceful in portraying their roles.

But I think this film suffers from what many do nowadays, those in which filmmakers are re-treading the same plot over and over again.  There is only so much they can do, other than pulling in more and more over-the-top scenes to grab and jolt the audience.  It would be so much more preferable to me for them to create new plots for current issues, rather than drawing on something like a 1973 Exorcist film, something long outdated.

An updated Conjuring tale may not necessarily be the best choice for a movie.

Posted by donnarcopeland at 9:37 PM