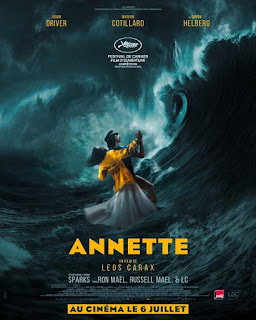 Unless they’ve already heard a significant amount about it, Annette is likely to take viewers by surprise.  It’s surreal in its drama and characterization; audiences interact  in unison and sometimes in song with the comedian; music by the pop and rock duo, the Sparks brothers (who are the writers as well) is quirky in their well-known style; and the whole production is unlike almost any of the American musicals.

Henry (Driver) and Ann (Cotilliard) fall madly in love shortly after meeting.  It’s an unlikely pairing in that he is a stand-up comedian called “Ape God” and she is an opera singer.  His routines are odd with a mixture of subjects that are meant to shock the audience, although there are always some who laugh.  One of the first signs of the significance of his feelings are his many references to Ann’s popularity and that in her roles she often dies in the end.  Very soon after their meeting, Ann is pregnant, and it looks like they will be happily making their way into a conventional family.  The birth of the child is remarkable and funny, in a way, in that it is accompanied by the singing of the doctor and nurses…and Henry.

The actors are well cast, and Cotilliard has a beautiful, pure voice that is soothing when the action is rough.  She is also a fine actor.  Adam Driver portrays his character in his usual convincing way; he is also a fine actor, and although it is clear he is not a trained singer, his voice is acceptable, using mostly a recitative style effectively.

The Sparks’ music is sometimes lyrical—especially when the chorus is commenting on the drama—pointed in its references, and droll at other times.  Ron and Russell Mael have done a remarkable job in designing a plot with music that is full of surprises and suspense, along with the entertaining quirkiness.  By the end, references made in the beginning make sense in retrospect, with life lessons learned.

Leos Carax (best known for Holy Motors) has taken the Sparks’ material and directed the production with sensitivity and an eye for timing and successfully producing an unconventional movie that, in the end, has substance.  It is slow at times, and some editing and shortening would have improved it.

Annette is not a film for everyone, but for those of us appreciating the quirky and unusual, it quite satisfies.

An unlikely pairing of an opera singer with a droll comedian that somehow works.