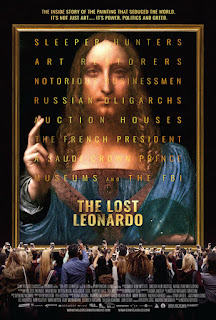 In the art world, provenance is of great importance in establishing the authenticity of a work.  In the case of art created in the 16th Century, investigators may spend years tracing the ownership of a painting, for instance.  My guess is that most people would not find that an interesting pursuit, but for museums, art dealers, investigative journalists, and collectors, it may be essential to establish the monetary worth of an object.  Yet, we find in viewing this documentary that such a search can actually be intriguing—even entertaining—especially when the conjectured artist is Leonardo da Vinci.

Danish Director Andreas Koefoed and his co-writers have not only traced some of the known history of a painting titled “Salvator Mundi” (Savior of the World), but has brought in the speculation and scholarly opinions about it across recent years, weaving in some of the darkness involved in art speculation and the commercial industry that has built up around it.  What starts out like an intellectual pursuit becomes something of a thriller.

It starts out with Alex Parish, who looks for art that might be done by a well-known artist but is not recognized as such by the auctioneer—a “sleeper:  In New Orleans, he comes upon a painting that looks like it could be the lost Salvatore Mundi—missing for centuries.  He contacts his friend Robert Simon, an Old Masters art dealer, and they decide to buy it together, with the intention of selling it to an interested buyer.  They are aware it is not likely to be a completely original da Vinci, but they also know that someone will be interested in buying it.

In Part I, “The Art Game”, we see that Parish and Simon have taken the painting to a professional restorer of art, Dianne Modestini, and her husband, a well-known conservator, to get their opinion about its authenticity.  She notices an unusual characteristic about the upper lip that is identical to one found on the Mona Lisa, and that helps convince her that it’s an original.  But she also recognizes that it has been painted over in places, and cleans it up, attempting to get to the original.

Parish and Simon then take it to the curator of the National Gallery in London who, in turn calls in a number of experts to get their opinions.  Rather informally, they all agree that it’s an original Leonardo, whereupon the painting is exhibited at the National Gallery as the lost Leonardo da Vinci, with crowds flocking in to see it.

In the meantime, numerous experts are critical of the rather superficial authentication process and its public exhibition, and discount it as completely original.

And now in Part II, “The Money Game”, we are into the dark world of art speculation and investment.  A Swiss billionaire businessman gets wind of the piece, informs his friend, a Russian oligarch…which gets us into the intrigue associated with the wheeling and dealing of art, particularly those with disputed provenance, and the most exciting(?) part of this documentary.

Part III, “The Global Game”, shows how the commercialism of art can be taken to a global scale when a business like Christie’s auction house becomes involved.

The Lost Leonardo takes you on a journey that will be almost as exciting as a mystery story, except that learning of the dark side of art dealing is rather deflating in the end.  The filmmakers have done a good job in telling the story of the Lost Leonardo in a way that crams in so many facts in, but is nevertheless most interesting and, at times, intriguing.

I recommend this film to anyone with the slightest interest in art and its commercialization of which the general public is usually unaware.  Who would’ve thought it could be a quiet thriller?

Posted by donnarcopeland at 8:09 AM