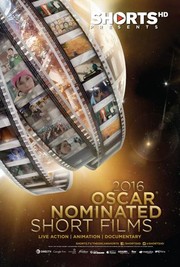 The Oscar nominated shorts are getting good reviews this year.  They cover current religious and cultural practices, family and tribal issues, and legal considerations across the world.

Ave Maria – (France) By Basil Kahlil and Eric Dupont
A quarreling Jewish family makes its way across Palestine territory, but their car breaks down when they run into something.  They’re at a cloister, and argue about whether to go inside to ask for help.  Inside, religious practices conflict—the nuns are in a period of silence, by now it’s Shabbat and the Jewish father is not supposed to dial a telephone, plus they have to avoid encounters with the Palestinians.  Chaos reigns until the abbess has everyone go into the chapel and pray.  During this time, she is inspired (by God, presumably).
Observation:  Religious and family bickering gets nowhere; thoughtful problem solving is key.

Shok – (UK) By Jamie Donoughue.
Two school chums get caught in the Albanian-Serbian conflict.  Their friendship develops around a bicycle, one helping the other out by making deliveries for which they get paid.  This involves some rule breaking, but the little “businessman” talks the bicycle owner into continuing.  Friendship is threatened by perceived betrayal, but the boys are working it out when the ultimate betrayal takes place.
Observation:  Sometimes there are forces at work beyond the individual’s control, and at times, reminders of significant loss may evoke poignant memories.

Alles Wird Gut (Everything will be OK) – (Germany) By Patrick Vollrath.
A divorced father comes to get his daughter for the day, but has bigger plans in mind.  After indulging his daughter at the toy store and fun rides, we find he has booked a flight to Manila through Dubai.  They are delayed by a cancelled flight, so must get a hotel for the night.  By this time, the child has figured out what her father has in mind and wants to go home to her mommie.
Observation:  A parent’s infantile needs cannot be met by his/her children.

Stutterer – (UK) By Benjamin Cleary, Serena Armitage.
A young man who stutters resorts to online dating, and has a six-month “relationship” with a woman.  When she suggests they meet in person, he’s in a dilemma because he hasn’t told her he stutters.  He postpones answering her, then when he’s afraid he’s going to lose her, he agrees to meet in person.  When he arrives at the designated place, he sees her across the street and pauses, during which time he sees something that gives him hope.
Observation:  Sometimes intervening forces work in a person’s favor.

Day One – (US) By Henry Hughes.
It’s day one for a female translator arriving for her first job in Afghanistan.  She’s excited but intimidated by the situation.  She is told that she must accompany some soldiers going to investigate a bomb maker.  Before they reach the place a bomb is thrown at a passing cyclist just ahead of them.  When they go to the house nearby in which the bomb maker is presumed to live and to arrest him, the chaos and fear precipitate the birth of the man’s child.  The translator is then confronted with the biggest challenge of her life because she has to assist in the birth (no man—even a doctor—can be in the room), and it won’t be a routine one.
Observation:  It often takes major challenges to help a person grow and mature.

Sanjay’s Super Team – (US) By Sanjay Patel, Nicole Grindle and Pixar Animation Studios.
Sanjay loves video games and action figures, and goes reluctantly when his Hindu father calls him for prayer.  As the father meditates beneath images of his gods, Sanjay surreptitiously picks up one of his action figures to play with; but strange, frightening things begin to happen, like his figure turning evil, and his father’s god figures battling with him.  After the gods subdue the action figure, Sanjay draws a picture, incorporating all the figures into it and calling it Sanjay’s Super Team.  When he shows it to his father, his father is pleased and they enjoy a quiet moment of togetherness.
Observation:  Sharing realities brings us closer together.

World of Tomorrow – (US) By Don Hertzfeldt
A girl named Emily is taken on a fanciful tour by a surprise visitor who shows her what her future world will be like, with some troubling developments.
Observation:  It would be worth our while to consider carefully what we are choosing for our future on earth.

Bear Story – (Chile) By Gabriel Osorio, Pato Escala and Punkrobot Animation Studio
A bear toy maker makes music boxes containing bear figures in a story to entertain children on the street for a coin.  One in particular shows a bad man putting a papa bear into captivity and forcing him to do pet tricks at a circus.  He manages to run away, but finds his house wrecked.  As he despairs, his wife and son reappear, and together they make it their home again.
Observation:  An animal’s plea for preserving its life in nature rather than in captivity as a showpiece.

We Can’t Live without Cosmos – (Russia) by Konstantin Bronzit and Melnitsa Animation Studio.
Two astronauts have dreamed about going into space since they were children.  Now, they’ve made it to astronaut training. The danger of the mission is made clear by their watching two bodies being brought past them from a space capsule, although two other astronauts walked off the ship very proudly.  One of the trainee astronauts is chosen to go next, and the other is in reserve.  We’re curious as to what will transpire with these two figures.
Observation:  Weighing the cost/benefit ratio of space exploration.

Prologue – (UK) by Richard Williams, Imogen Sutton and Animation Masterclass.
Nature seems serene as a little girl watches bees gathering pollen and a butterfly getting nectar from a flower.  Then suddenly, ugly men appear with shields, swords, and bow and arrows, and crows fly menacingly overhead.  After a fierce battle, the dead are lying on the ground and the little girl runs to her grandmother in fright.
Observation:  War as a spoiler in nature.

Chau:  Beyond the Lines – (US, Viet Nam) By Courtney Marsh, Jerry Franck Synopsis.
Chau is one of the millions of victims of Agent Orange that was dropped on North Viet Nam between 1961 and 1971.  He is in a “camp” for such children, who are disfigured in all kinds of ways.  Chau’s limbs are affected, but he loves art and has aspirations of becoming an artist and designer of clothes.  Many around him think that is unrealistic, but he is unusually determined, and we see him manage to achieve his dreams.
Observation:  An inspiring tale of one person overcoming incredible odds to achieve his aspirations and independence.

Last Day of Freedom – (US) By Dee Hibbert-Jones, Nomi Talisman.
Bill Babbit has a younger brother who served two terms as a U.S. Marine in Viet Nam.  Unfortunately, Manny returned with PTSD and possibly paranoid schizophrenia.  He ends up with Bill and his family providing him a home and looking out for him.  Then one day, Bill discovers incriminating evidence against Manny.  He considers carefully what to do, and seems to do exactly the right thing.  The problem comes when the legal system does exactly the opposite of what Bill was led to believe would happen by the Police Department.
Observation: An exasperating personal experience changes a man’s opinion about an important issue, the death penalty.

Body Team 12 – (Liberia) By David Darg, Bryn Mooser.
The film is narrated by a dedicated health care worker in a team that picks up the bodies after death and takes them to be disposed of safely.  She is soft-spoken and sympathetic toward family members who are openly grieving and not wanting to let the body of their loved one go.  She counsels them gently, and shows a patriotic spirit in that she sees herself as helping to save her country.  Finally, she notes that although she is the only female on a team, she thinks women are better suited to the task compared to the men.
Observation:  A picture of the terrible aftermath of an Ebola outbreak.

Claude Lanzmann:  Spectres of the Shoah – (Canada) By Adam Benzine
Claude Lanzman is a French journalist who made a film called Shoah about the murder of European Jews in World War II, and considered by some to be a masterpiece; but what kind of masterpiece is the question Benzine explores in this documentary short.
Lanzmann’s film was commissioned by the Director-General of Israel’s Ministry of Foreign Affairs in 1973.  Lanzmann was intimidated by the proposal, and upon first hearing it, walked the streets of Paris all night wondering whether to say yes.  By morning, he had made his decision to do it.  It turned out that it took 12 years to complete—longer than anyone expected, and took its toll on Lanzmann himself.  It’s a report on the Holocaust told from the Jewish perspective, and is not about the survivors; it’s about death.  Lanzmann interviewed people like the Sonderkommandos (those who disposed of the bodies) a Nazi guard, and a Nazi officer.
For this documentary, Adam Benzine interviewed Lanzmann about his early life and his life-changing journey through the 12-year process of making the film, using outtake footage from the filming of Shoah to compose a brilliantly filmed account of a remarkable man’s dedication in showing the world a picture of the Holocaust as seen through Jewish eyes.
Observation:  A realistic account of a dedicated jounalist’s drive to elaborate on what the world knew about the Jewish Holocaust.

A Girl in the River:  The Price of Forgiveness – (Pakistan) By Sharmeen Obaid-Chinoy.
So-called “honor killings” are legal in Pakistan.  Over 1,000 Pakistani women are murdered every year by male relatives who believe the girl/woman dishonored their families.  Sharmeen Obaid-Chinoy does an excellent job in helping westerners understand this centuries old tradition—not that we would agree, but we can see their thought processes.  It is related to their belief that God wishes for women to be under the control of men and to their concerns about preserving the community. If two families in the same neighborhood begin fighting the whole neighborhood could be threatened.  But if the victim and her family come to a place of forgiveness, community life can return to normal.
Young Saba, whose father and uncle shot her in the face and dumped her in the river to die, does publicly forgive them so they can be released from jail and support their families, but deep in her heart, she says she will never forgive them.
Observation:  One hopes the younger generation can effect change in this barbaric process.

Note:  Body Team 12, Claude Lanzmann:  Specters of the Shoah, and A Girl in the River are HBO documentaries.
Posted by donnarcopeland at 2:54 PM