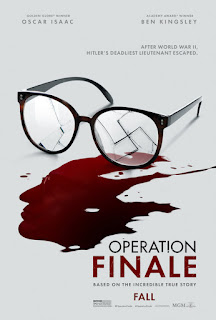 The title is borrowed from Nazi Adolph Eichmann’s term, the “Final Solution”, his proposal in 1942 to get rid of the Jews in Germany, which was to exterminate them, something he accomplished with staggering efficiency.  The result was the deaths of 3-4 million Jews in occupied Europe and another 2 million elsewhere.  Fast-forward to 1960, when Israeli Jews discovered where Eichmann was after his escape before the International War Crimes Tribunal was held in Nuremburg.  He had fled to Buenos Aires, Argentina, where he lived with his family under a pseudonym and worked in a Mercedes-Benz factory.
With the blessing of Prime Minister David Ben-Gurion, a small team of Mossad agents was dispatched to Buenos Aires to abduct Eichmann and bring him to Israel for trial.  Disagreements had to be worked out between those who were still so enraged they wanted him killed and maybe tortured on the spot.  But cooler heads argued that putting him on trial for the whole world to witness was a better plan.
Although the real events were laden with drama, the movie, Operation Finale, elaborates on history to increase the tension and excitement for audiences.  It could be argued that this is unnecessary, in that simply telling the story like it happened is drama enough.  For instance, I understand that in actuality Eichmann was drugged and disguised as an injured airline worker with a bandage on his head in order to fly him to Israel.
At any rate, the film focuses on the Israeli operatives and their interactions with one another and with Eichmann, giving us background stories that make us care about them and their families and accomplices, and helps us appreciate the dangers of the operation.  The action of the story is so absorbing and exciting, that if you didn’t know the outcome—or even if you do—you will be impressed.
Oscar Isaac as Peter, one of the Mossad agents, and Ben Kingsley as Adolph Eichmann make the two characters come alive, especially during the time they are in a safe house before their departure from Buenos Aires.  Peter is convinced that they will get more from Eichmann—specifically, a signature—by establishing rapport with him, rather than obtaining it through force and torture.  This is borne out, which pleased me, in that it has been shown that this approach is much more effective than torture.  Unfortunately, they also demonstrate torture giving captors the information they desire, which undercuts the good example.  (Whether or not these circumstances are a reflection of true events or whether they are fiction for the movie I cannot say.)
All of the actors are very good, and Matthew Orton’s script and Chris Weitz’s direction—along with the lesson in history, albeit a compromised one—make this a worthwhile movie to see.  The “dressing up” for film audiences doesn’t detract too much from essential historical elements, which allows me to recommend it.

A thrilling, tension-filled story that reflects enough of the historical events to make it worthwhile for all to see.

Posted by donnarcopeland at 8:59 AM