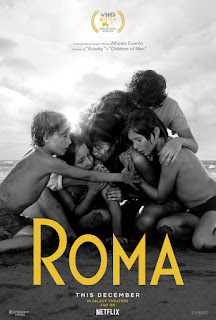 Roma can be seen as a tribute to Alfonso Cuaron’s nanny/housekeeper when he was growing up.  He has said it is partly autobiographical, and the character Cleo (Aparicio) is truly someone to admire in her faithfulness, caring concern, diligence, and honesty.  Cleo works for a middle class family in a household with four children and a grandmother in a district of Mexico City called Roma in the 1970’s.  The father is a physician always on the run, showing little love or even attention to his wife or his children. Family members are used to having someone waiting on them, so Cleo’s time—all the time—is picking up after them, doing the laundry, bringing them treats, and helping Adela (Garcia), the cook.  The children clearly love her and show their appreciation for what she does.  The mother also seems to consider her part of the family—most of the time—seeing she gets medical care and bringing her along on vacations.
Cuaron presents us with a cross-sectional picture of the family and the context in which they live during a year when the Mexican government is in conflict with student protestors and guerillas.  Although these events are going on around the family (military bands marching down their street, police/student fighting in the streets outside the hospital), they are mostly untouched, partly because they are going through their own dramas at home, like fire, earthquake, marital conflict, pregnancy outside marriage, car accidents, and near drowning.  The family is seen to be rolling with the punches and coping with whatever life throws at them.
And I suppose that is the point of the story, that common ordinary people face traumatic events and manage to get through them despite the odds.  In the end, perhaps it poses the question as to whether governments do as well as their citizens.
Yalitza Aparicio has become a sensation since the film first debuted.  It was difficult for Cuaron to find the right actress after talking extensively with his childhood nanny, Libo, and searching all over Mexico, finally in small towns.  When Aparicio first appeared for an interview, her family was suspicious that it might be human trafficking.  But they allowed Yalitza, a schoolteacher, to proceed, and she has been a sensation ever since the film first previewed.
Cuaron can be proud of his own career, winning awards for Gravity, Children of Men, and Y Tu Mama Tambien, but Roma is his baby, both in its autobiographical aspects and because he has so many roles in producing the film:  writer, director, producer, cinematographer, and editor.  The skillful craft employed in making it is another of its distinctions.  It is flawless in many aspects and shows what dilemmas and paradoxes “maids”/”nannies” encountered at the time, but other films have also featured this, such as La Nana (Sebastian Silva, 2009), which shows the unique bond that can form between the employer's family and the maid/nanny.

A heartwarming drama about a family in Mexico City in the 1970’s related eloquently within a black and white frame.