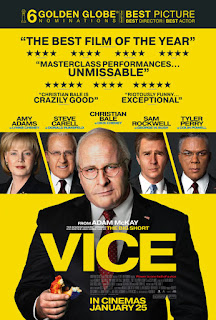 This well conceived production with incredible casting and screenplay should hold up against the sure-to-come backlash.  Its greatest value lies in bringing to life background events and personalities that changed our country forever during the period of Richard Cheney’s political career (roughly the 1970’s-2009).  The choice of having a narration, and the selection of the figure to do it, points to just one of the creative ways in which writer-director Adam McKay and his colleagues present the personal and political values and characteristics that aided Richard Cheney and his wife Lynne in attaining the power they ultimately achieved in the U.S. government.
The story starts out with Cheney as a wayward partier when it looked like he would simply be a neer-do-well.  Enter Lynne Cheney, who had already dealt with alcoholism in her father, and gave her husband clear messages about her expectations of him and the consequences that would ensue should he choose not to abide by her conditions. Dick Cheney shored up, and began his career in politics.
His true character begins to emerge after he has made it to Washington as an intern and aligns himself with Donald Rumsfeld.  Rumsfeld’s mentoring meshes completely with the personality of Cheney already in place:  ambitious, crafty/secretive, uncanny perception and the ability to look ahead and plan.  In the course of his career, Cheney will undergo ups and downs, but he will always have an eye out for opportunity, with a solid backer/strategist in his corner, his wife Lynne.
Through significant political threats (such as significant and historically unprecedented upsets in White House administrations) to his ambitions and heart attacks, Cheney forges on, seemingly undeterred, without any apparent contemplation or self-examination about his actions.
Vice charts these activities, showing how stable he is in his positions and machinations.  When George Bush becomes President, he sees a golden opportunity to push forward something he has learned about from his lawyer, David Addington, the “unitary executive theory”, in which the power of the executive is absolute; the President can, literally, do no wrong. Application of this idea paved the way toward eroding previously firm policies about civilian privacy, foreign policy, and wartime engagement and behavior.  “Where law ends, tyranny begins”—an idea first attributed to British philosopher John Locke (1689) and carved on the Supreme Court building, which flashes briefly during a scene in this film, a meaningful quote.
Christian Bale is a wonder playing Dick Cheney, who he doesn’t ordinarily look or sound like.  But with the extra weight, prosthetics, and studious attention he gave to media in preparing for the role, Bale is a dead ringer.  Amy Adams as Cheney’s stalwart, tenacious, and adoring wife is likewise convincing.  This is as strong a casting I’ve ever seen for a picture, including Steve Carell as Donald Rumsfeld, Sam Rockwell as George Bush (the younger), and Alison Pill as Liz Cheney.  Bale and Adams will almost certainly be named during the award season coming up.
Adam McKay’s writing and direction of a subject that is sure to be controversial is, probably, one of his best, even taking into account The Big Short, which won an Oscar for screenplay.  I fully expect Viceto reap accolades during the awards season.

Demonstrates the power of drama in relating some significant historical transitions in the U.S.