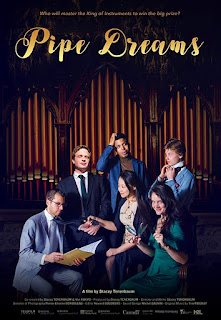 Competitions are generally fun to watch, and Stacey Tenenbaum (writer/director/producer) of Pipe Dreams has created a finely constructed and balanced production of the 2017 Canadian International Oregon Competition in Montreal, Canada, where the first place prize is $100,000.  Featured competitors comprise a diverse group, one from China, one from New Zealand, one from Germany, and two from the U.S.  Tenenbaum shows us vignettes of the personal lives and histories of these competitors, their attitudes toward organ music and their programs specifically, and their general preparations for the competition. After acquainting us with the group, their experiences before the contest are shown four months, two months, and then two weeks before the event, as well as during the first, second, and final rounds.
Yuan Shen has a lot to prove even from birth, when her father hoped for a boy and got a girl instead.  Moreover, he is an accomplished organist who has been her teacher most of her life, and maintains an encouraging presence for her, even now. Performing Tai Chi together helps sustain a close relationship.
Alcee Chriss is an African-American Texan who grew up in modest circumstances with gospel music and jazz.  He and his brother target practice with guns for diversion.  He lost his mother when he was in high school, and gets inspiration from remembering her during his practices.  He tends to get very nervous before competitions, so listens to guided relaxation scripts to calm himself down.
Sebastian Heindl, the youngest of the competitors at 19, is from Germany, even the city of Bach, whose music is a major part of the CIOC.  He was regarded as a child prodigy and has grown up with Bach, often singing along as he is practices the organ.
Nick Cappozoli is highly controlled, according to his teacher, who encourages him toward introducing “ecstasy” and more “craziness” into his playing.  He is from Pittsburgh and enjoys playing miniature golf with his family.
Thomas Gaynor, from New Zealand, travels around the world, sometimes for contests, where he has lost twice to Alcee, a particular competitor.  He has loved the organ as a child, being particularly fascinated with its mechanics.
By the time of the contest and learning that eight of twenty competitors will be eliminated in the first round; six of twelve will be eliminated in the 2ndround, and who the winner will be after the finals, the viewer has become invested in seeing who will come out on top and in hearing their individual reactions to the outcome.
Pipe Dreams offers the opportunity to observe competitors in a contest that has a different flavor from our much more prominent athletic events and music award ceremonies.  Tenenbaum has done a fine job in showing the personal struggles and aspirations of a group of very interesting and admirable young people trying to do their best in a public display of their primarily solitary practiced talents. Clearly, the joy of what they do sustains them.
Perhaps the only addition I would make to the film would be for a post-session in which knowledgeable people would help us understand the factors that were at work in the jurors’ decisions.  Were they primarily focused on technical expertise, choice of program, or some other considerations?  Obviously, to someone who was impressed with all the players, I’m curious about how the decisions were made—if it’s even possible to get those involved to discuss it.

Pipe Dreams is for the music lover who wants to get caught up in a refined contest of organists.


PIPE DREAMS was previewed for Austin Film Festival (Oct. 24-31).  It will be showing:

Posted by donnarcopeland at 1:56 PM