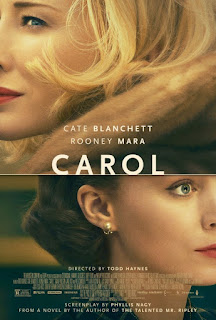 Much has been made of the Lesbian relationship in Carol, but this award-winning film at Cannes (Best actress for Mara and Queer Palm for director Todd Haynes) contains much more in-depth exploration of women in the l950’s, and the trials and consequences in particular of these two women, Carol (Blanchett) and Therese (Mara), who simply don’t fit the mold.  They are independent thinkers, despite Therese’s complaint that “I say ‘yes’ to everything.” The two men (Chandler as Harge and Lacy as Richard) who claim they’re in love with Carol and Therese are completely taken aback and bewildered by the women’s resistance to being appendages.  The rejection is not only mystifying; it’s a painful narcissistic wound for them.
Therese is a shop girl at a department store and when Carol comes in to buy a Christmas present in the Toy Department, they seem to have an instant awareness and attraction to one another.  Immediately, Therese shows that she’s not a typical 50’s girl when she says she didn’t care much for dolls as a child; she loved trains.  And Carol is then easily convinced to buy her daughter a train when she finds that the doll she was looking for is not in stock.
This could have been the end of it, except Carol (unconsciously?) leaves her gloves on the counter and when Therese finds them and mails them to her along with the train set, Carol must thank her by offering to take her to lunch.
The difference in class between the two women is noteworthy; Carol wears an expensive fur and goes to high-end restaurants.  When she orders a martini and quiche for lunch, Therese says she’ll have the same, although in her words, “I barely even know what to order for lunch.”  This difference in background becomes a significant issue throughout the drama that will take place.  The wealthier, older, more experienced Carol could be seen as “toying” with Therese for her own amusement; although this is not born out in the end when Carol shows moral/ethical strengths that are not obvious initially.
The highly respected and admired Blanchett performs at her usual level of excellence with fine nuances and subtleties.  But Mara is equally good here in playing a younger woman unsure of herself and still in the process of finding out who she is and what she wants in life.  Director Haynes clearly understands women, and with screenwriter Phyllis Nagy has adapted Patricia Highsmith's novel for the screen with knowing grace, utilizing—along with the actors—the talents of musician Carter Burwell and cinematographer Edward Lachman.  Lachman uses light and screen shots to interesting effect, as does Burwell with music anticipating scenes and capturing mood.  The movie takes place at Christmastime, and the carol “Silver Bells” is perfectly apt as the two women embark on a hopeful journey together.
Carol proceeds slowly and gently as the women’s relationship develops, although there are some jolting surprises that make the viewer sit up straight.  The ending is remarkable when Carol pleads her case in a custody battle with her husband at a meeting in the presence of lawyers, imploring them to keep the interests of their child foremost and arguing reasonably about hers and Harge’s joint responsibilities.  She warns that “a court battle could get ugly, and we’re not ugly people.”

Carol reminds women that even though we have a ways to go, contemporary women can be grateful for the progress that has brought us this far.

Posted by donnarcopeland at 11:09 AM