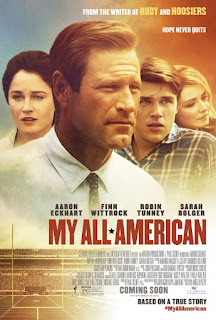 My All American is written to be inspirational, showing that true grit, family, and religious faith is a winning combination.  Based on a true story, Freddie Steinmark (Wittrock) plays football at Wheatridge High School in Denver, and despite his small size becomes a local hero on the field.  He is from a modest background, but his father appears to be an A-plus parent, seeing that Freddie makes the most of his physical and intellectual abilities.  He puts him through rigorous daily routines, which the boy not only goes along with, he does so with a smile and a cheer, as if he is cheering himself on—except that he is always humble.
Freddie makes such an impression on his tobacco-chewing coach his plays are shown to Darrell Royal (Eckhart), the famed coach of the University of Texas champion football team (1957-1976), who is duly impressed, and immediately gives the stunned Freddie a football scholarship.  This is a film where traditional American values, which include religious faith, are borne out to be the recipe for success.
We see Freddie achieving remarkable feats on the ball field and doing well in his academic subjects, all while cultivating an enduring romantic relationship with blonde beauty Linda (Bolger) at Wheatridge High, a stalwart supporter always by his side.  She manages to get into the University of Texas majoring in Spanish so they can be together in Austin.
At UT, Freddie not only excels on the football team, he cultivates friendships and alliances with his teammates and wins the respect of the coaches.  He seems to have an innate ability to connect with people, minimizing competition as he promotes collaboration.  The film is effective in showing him in action with clips of the UT football games that document his prowess on the field.
My All American is a film for those who like to be inspired by traditional American values and success stories.  I find it to be a bit “sugar-coated” with all-positive traits in characters that are likely to be flawed as well as admirable.  Angelo Pizzo, writer and director, has brought us a film that will be inspiring to many, but for those who are more reality based, it may be a little too sweet and perfect.

Football fans will be inspired by My All American.

Posted by donnarcopeland at 8:03 PM