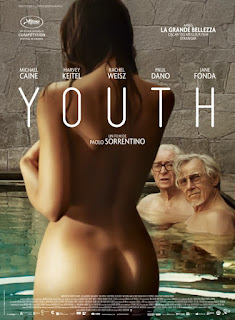 Youth is an artistic production by the poetic writer/director Paolo Sorrentino (The Great Beauty), who reminds of fellow Italian Federico Fellini in his imagery and talent for making what normally seems ugly into something of beauty and interest.  In this film, aged as well as young bodies are presented; wrinkles, potbellies, sagging breasts, gorgeous shapely figures, crippled, handsome—all are dished out liberally without photographic judgment.
But the film has points to make, lots of them.  Points about physical and mental aging, fathers and mothers—especially fathers—cinema vs. television, how we come to understand the world and people, desire vs. apathy, regret, fidelity, and decisions to make about endings.  All the characters seem to be in turmoil (except perhaps the meditating monk), captured eloquently by the cacophony in a cuckoo shop where a character has gone around and turned them all on at once.
The setting is an elegant old-world hotel in Switzerland where many of its guests have been coming annually for years.  Fred (Caine), a famed orchestra leader, and Mick (Keitel), a well-known movie director, are old friends who voice much of the film’s sentiments about aging and perspectives on their own lives.  They trust each other up to a point; that is, “We only talk about the good things.”  Yet, they do explore certain regrets and disappointments and Fred desperately wants to know if Mick ever slept with a girl they both loved.  Fred’s daughter Lena (Weisz) is married to Mick’s son Julian (Ed Stoppard), which makes another bond between them.  Each is subject to pressures coming from the outside.  The Queen of England wants the reluctant and apathetic Fred to conduct his famous “Simple Songs” for Prince Philip’s birthday celebration.  Mick, ever the optimist, is trying to get his movie Testament off the ground and is waiting for its star Brenda (Fonda) to arrive and producers’  go-ahead to start filming.  He and the screenwriter still have to come up with an ending, though.
Youth is made in the European style of slower pacing, philosophical discussions, and subtle humor, metaphors, and allusions, which make it a film well worth seeing multiple times.  It’s full of surprises as characters behave in unexpected ways, yet remains firmly grounded in reflecting real dramas.
Caine and Keitel are masters at what they do and keep us thoroughly captivated as they talk about their lives.  Weisz as the daughter of Caine’s character has the greatest emotionality to convey, and it’s engaging to hear her perspective of her family life growing up contrasted with her father’s.  Fonda has a wonderful cameo as an aging actress turning the tables on her director in years of films.  Since the actress is known for her smooth skin and physical fitness, it’s fascinating to see her in this role.
Sorrentino’s colleagues in music (David Lang) and cinematography (Luca Bigazzi) measure up to his creativity and excellence in their own specialties.  All three have produced a comprehensive production that merges the disciplines seamlessly into a work of visual and auditory art.

Go on vacation to an opulent hotel in Switzerland where you will be entertained with intelligent conversation, fascinating stories, and spectacular landscapes, all accompanied by delightful and entrancing music.