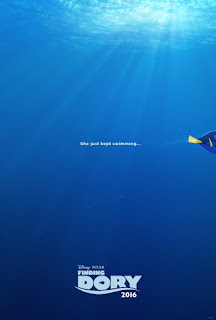 Disney’s Pixar again delivers a colorful, sharply animated fantasy for children.  Dory (Degeneres), the blue fish has short-term memory loss, and frequently loses her way, despite the best efforts of her parents to teach her strategies she can use to find her way home.  Unfortunately, soon after the story begins, she gets lost after an impulsive action, and much of the film involves her trying to get back to her parents with the help of her friends, new and old.  Two of the old friends are Nemo (Rolence) and his dad Marlin (Brooks).
It’s something of a coming-of-age story for a fish, but valuable lessons can be learned in the process of growing up, even by a fish.  We see Dory gradually developing self-confidence, a better attention span, persistence in the face of obstacles (“There’s always a way…”), and a growing sense of responsibility for others.  There are humorous moments for adults when we see Nemo trying to coach his dad on behavioral techniques like positive reinforcement when Marlin has a tendency to discourage kids.  And all ages will chuckle at Hank (O’Neill) the octopus (or “septapus”, after he lost a tentacle) contorting his body elastically in every possible position or getting splayed against a wall accidentally.  I understand he is likely to become a beloved figure for children.
Then there are funny sequences with the sea lions (Elba and West) commandeering a rock on which they can lazily sun, observing and commenting on the goings-on around them.  They occasionally render advice and instructions, while keeping an intruder off the rock they are unwilling to share.
Another humorous aspect of the story are occasional announcements by Sigourney Weaver at the Marine rescue facility where part of the story takes place.  As the director of the facility, she instructs visitors about where to go and what the aims of the facility are:  Rescue, Rehabilitate, and Release.  There are terrifying moments when Dory lands in a bucket of dead fish and some marine animals are sent against their will to Cleveland to be in an aquarium if it’s thought they can’t make it in the open sea.
In the larger scheme of things, Finding Dory models the values of family, loyalty, friendship, openness to new experiences, and willingness to take risks.  It’s not preachy in the least, and the lessons are to be deduced from the actions of the characters.  My only objection to it is the hair-raising truck ride driven by Hank and Dory at the end.  This is intended to be funny, but to me it’s simply bad modeling for children.

Adventures that help Dory manage a disability and grow up.