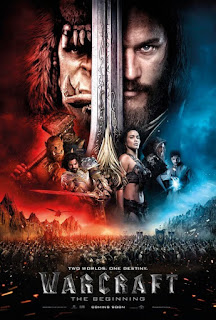 Warcraft, based on the “World of Warcraft” videogame, involves a complex story pitting different nationalities together, mixing in magical feats that can ward off predators and transport people through space.  The human magicians are called “guardians”, but like everyone else, they have vulnerabilities.  Humans live in a place called Azeroth, and peace has reigned between them and the Orcs for hundreds of years; however, a new predator has come on the scene that sets out to destroy both civilizations.  They are about to wipe out the Orcs, who are now going after humans and their lands to survive.
Major players in Azeroth include King Llane Wrynn (Cooper), his leading soldier Lothar (Fimmel), the guardian Medivh (Foster), and an aspiring guardian Khadgar (Schnetzer).  There is a power struggle among the Orcs for chiefdom.  Gul’dan (Wu) is the current chief (evil) in desperate need of more fuel (his plans are to use captives for that purpose), and sends his “horde”, including Durotan (Kebbell) and his pregnant wife Draka (Galvin), and others into Azeroth for an initial attack on humans.
Amidst this attack, we’re introduced to Garona (Patton), half-Orc/half-human as a result of her parents’ mating, and now an outcast chained to one of the Orc warriors.  Lothar rescues her for the purpose of getting intel about the Orcs and promises to take care of her if she will help them, which she does, making her walk the line of divided loyalties.
This film throws a lot at the viewer to process, and many of the Orc characters look so much alike it’s hard to tell them apart.  Moreover, it’s so loaded with CGI, that aspect almost overwhelms the story.

Primarily for Warcraft game enthusiasts who favor CGI over story.

Posted by donnarcopeland at 9:12 AM