TEENAGE MUTANT NINJA TURTLES: OUT OF THE SHADOWS 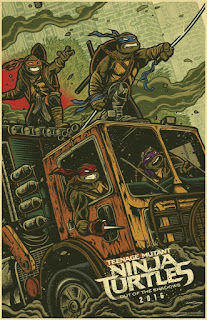 There is a new villain in TMNT:  Out of the Shadows, who plots with the imprisoned/escaping  Shredder (Tee) for world domination through extraterrestrial means.  Kraang (Garrett) has a robot body that has a pink tumor-like head thrusting out of its midsection to snarl and threaten whoever comes into its path.  It and Shredder have enlisted the aid of Baxter Stockman (Perry) and his lab to assemble the necessary materials for achieving their ends.  The assembly requires obtaining three critical parts scattered around the world.  It also involves a purple substance that when ingested will transform two criminals, Rocksteady (Farrelly) and Bebop (Williams) into a rhino and a warthog who will be super soldiers for Shredder.  The thunderously bumbling antics of these two provide some of the better humor of the film.
Meanwhile, we can savor the interactions of the four Turtle brothers horsing around, eating pizza, quibbling with one another, and going after the bad guys.  They are chafing at having to remain underground so they won’t frighten American citizens but will still be on call to rescue their beloved New York City when necessary.  Their reporter friend April (Fox) is excellent at snooping around and uncovering evil plots where the Turtles can intervene.  In addition to April, their team is able to call on diffident Vernon Patrick (Arnett) who took credit for the Turtles’ saving New York previously to keep the true heroes’ identity secret, and Casey Jones (Arnett), a vigilante with an assortment of sporting goods.
April has uncovered the plot being set in motion and calls the Turtles into action.  Along the way, she will need the help of Patrick the “Falcon” and Jones, despite the latter’s offending Police Chief Vincent (Linney) and warrants for the arrest of the Turtles.
I think one goes to see movies like this for the special effects and stunts rather than for the story, and in that respect, the film is entertaining and will appeal to mainstream audiences who like this genre.  Subjects did arise that would be worthy of discussion, such as arguments for and against the Turtles’ using the purple substance to transform themselves into human shapes, the struggle to maintain leadership and teamwork among the Turtles, and the “no honor among thieves” theme in regard to the villains.

If you like the Turtles, you’ll probably like this; otherwise, skip it.  You won’t miss a thing.