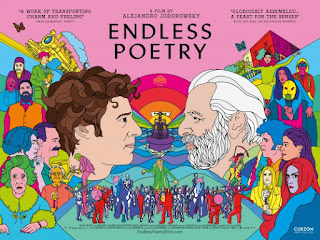 Jodorowsky is a man unto himself.  He likely has no parallel in his range of occupations:  Chilean-French film and theatre director, screenwriter, playwright, actor, author, poet, producer, composer, musician, spiritual guru, and even cartoonist.  He has always wanted to have a positive influence on young people, wanting them to explore, think, and look beyond what is seen in reality.  His work is considered avant-garde, and culminates in this his latest film, a poetic memoir that highlights his relationship with his father and how it made him the artist that he is.  He perhaps owes his artistic sensitivities to his mother, whom he portrays as a kind, loving woman whom he has speak her lines in operatic song.  He sympathizes with her never being able to please her mother as he was never able to please his father.  Defying his father, who expected/counted on his becoming a doctor, he became a poet (although not a “faggot”, which his father was convinced every male artist to be).
This film starts out giving us a picture of Jodorowsky’s early years as Alejandre (portrayed by his son Adan) living in a poor neighborhood where his father has a shop.  It shows his father’s attitude toward the poor (“they’re all thieves”), his sadistic treatment of them, his horror at his son’s interest in poetry, his mother’s fawning over a family who doesn’t value her, and his early fascination of poetry and poets.  But when he is having a particularly bad time, he is comforted by a drunk in the street telling him not to worry; “A naked virgin will illuminate your path with a blazing butterfly.”  He came to realize that that “naked virgin” was a poetic muse who would lead him into becoming a true poet.
Reflecting what actually happened in his life, the film shows Jodorowsky coming upon a group of artists who will allow him to live with them and foster his artistic pursuits.  One sends him to Café Iris where poets and their muses frequent, and there he meets Stella Diaz (Flores) a red headed, voluptuous poet, who becomes his muse.  She spurs him toward daring to give his imagination full vent, and his reputation in this circle is established.
Eventually, he is on to bigger and brighter things—Paris, for instance, where he is in search of his true self and, in his grandiose way, to salvage Surrealism.  He has an emotionally compelling farewell with his father, in which he makes peace, and comes to understand what his father actually gave to him.
Jodorowsky’s art permeates this film, even extending to his progeny’s contributions.  Adan not only portrays his father in his younger years, but lends his music to the score.  Alejandro’s other son, Brontis, portrays his father in his younger years.  The production design and cinematography (Christopher Doyle) are endlessly (pun intended) creative, such as in the beginning of the film when storefronts are cleverly switched and a locomotive runs through town.  Sara Jodorowsky’s (Flores) operatic “talk” is enchanting, and the metaphorical images, such as devils and skeletons dancing, are beautifully filmed throughout.  Christopher Doyle is the cinematographer.

For those interested in art house films, Endless Poetry is a must-see—the most poetic of memoirs

Posted by donnarcopeland at 5:29 AM