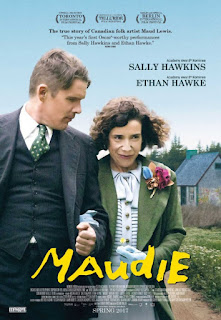 The sheer beauty in this film is hard to fathom; it’s beautiful even in its pain.  The writer Sherry White and all the filmmakers together coalesced to produce a fine work of art visually, emotionally, and musically.  It sings in rapture through its joys and cries out through its grief.  I wept as much for its beauty as for its pain.  And there are liberal doses of all the shades of emotion and meaning throughout.
The film opens on a scene of Maud painting with obvious effort and perhaps pain.  She is arthritic, but at the moment is clearly transported into the bliss of creativity.  Then we begin to see pictures of those in her life:  a stern aunt, a devious brother, an insensitive shopkeeper.  But some of the main delights of the film are to see Maud in action with all her canniness, fundamental kindness, and boldness, taking people by surprise all within the halo of her cheeriness.  We soon come to love this oddly shaped figure—as she calls herself.  “I was just born funny”, she states, with a smile and with all the insight into others she has developed over years of observation.
Maud shows her industriousness and business acumen in humbly finding another place to live and support herself, much to her feeling-put-upon aunt’s surprise.  Another odd figure places a notice in the general store for a “housemate”—actually someone who will take care of him, overlook his acerbity, and have no opinions.  But Maud has no hesitation in seeing this as a way out from under her aunt.  The ad is placed by Everett (Hawke), who has his own background story of being orphaned and never having had the opportunity to taste the niceties of life.  He has no conception of those things.  Through a combination of gall and complete submissiveness, Maud lands a job with room and board and 25 cents a week.
Their adjustment to one another makes up the entertaining, insightful thrust of the film, which shows the lengths to which a person can go in successfully surviving an unkind world.  It takes grit and a whole bunch of other qualities
Another hallmark of Maudie is its mercy, lent of course by Maud, who never holds a grudge and manages eventually to charm the most recalcitrant obstacle.  This is most evident in the way she is able to forge different responses from someone who has been so deprived:  Everett.  Their encounters are instructive to us all (seeing the power of simple kindness), but touchingly, laugh-out-loud humorous.
The direction (Aisling Walsh), cinematography (Guy Godfree), and music (Michael Timmons) give further testament to the quality of this film.  Performances by Sally Hawkins and Ethan Hawke could be lessons for striving actors in their ability to immerse themselves so completely into characters so different from themselves.
Rarely does a film come along that is so well crafted, warmly human, humorous, and wise as Maudie.

Posted by donnarcopeland at 2:41 PM