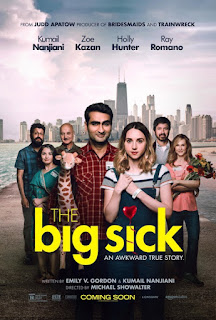 Kumail (Nanjiani) is a standup comedian who gets heckled one evening by a young blonde woman in the audience.  It annoys him, so he confronts her later at the bar, and she argues with him—“Well, what if I said…” and she names something he couldn’t argue with.  In no time at all, he knows she is Emily (Kazan), and they spend the night together.  What transpires after that is an on again off again connection in which they initially make it clear that they’re not dating, and they agree on a two-day rule (never see each other more than two days in a row), and of course they do become attached.
Enter family(s).  His parents are traditional Pakistani who are working diligently to find him a nice Pakistani wife.  He loves his family and knows that he will be disowned if he doesn’t agree to an arranged marriage, so of course he doesn’t tell them about Emily.  Nor does he tell Emily about them.  She finds out, is incensed, and dumps him.  Moreover, she’s a daughter who tells her mother everything, so her parents are well informed about Kumail.
Some time later, Kumail receives a frantic call from Emily’s best friend telling him that Emily is in the hospital, and she and their friends can’t wait any longer because of finals at school, and would he please go to the hospital and see that she gets home.  He has been well brought up and does the compassionate thing, only to be rejected once again by Emily, but greeted by the attending physician who is sure he is the husband who must give consent for Emily to be put into a coma to treat the infection.  (This scenario wouldn’t happen in a real hospital, but for the sake of comedy, it transpires.)
By this time, Emily’s parents have been notified and appear at the hospital.  Emily is already in a coma, so Kumail must deal with them directly.  Initially, they brush him off and let him know he is “off the hook” and can go home.  But something keeps him there.  As time goes on, and Emily is in a coma longer than expected, they do what caring people do when they’re thrown together by life-threatening circumstances, they begin to relate to one another as humans.  The question is, how will Emily react when she is out of a coma.
Nanjiani and his real-life wife, writer Emily V. Gordon, wrote the script based on their experiences in getting together.  He is Pakistani from a traditional family, and she is American.  They wrote it as a comedy of a couple from two cultures trying to make it together, and are successful in presenting a realistic picture that is funny as well as poignant.
Nanjiani (a veteran of “The Daily Show” and currently on “Silicon Valley”) plays himself well as a sincere but flawed character trying to make it in comedy, but not always able to separate himself from that and be a real person.  Comedy slips in when he is anxious, as for instance when he is asked (rudely, because of his looks) about 9-1-1, and makes a dark comedy joke about it.  Zoe Kazan adeptly portrays Emily as a young woman trying to establish her independence and maintain control over her life.  After being over-parented by a solicitous mother, she is wary of commitments, and needs space.
Holly Hunter and Ray Romano add significantly to the drama as Emily’s parents, colorful and a little flamboyant.  Both actors make real and appealing portrayals of their characters in their fights, expressions of love, and quirkiness.  Showing the contrasting personalities and values of Kamail’s parents, (Kher and Shroff), is an essential component of the cross-cultural dynamics, and the actors and script succinctly highlight the issues involved.
Director Michael Showalter and the writers have created a movie that is wholesome in its wit, bringing out the humor and complications involved in people from different cultures trying to make it together, along with present-day ambivalences about commitments.

Pakistani and American families trying to unite around a love relationship.